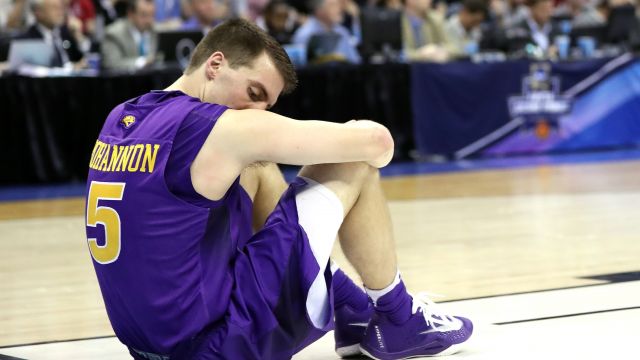 SMS
Northern Iowa Had A 100-Percent Chance Of Winning … And Then Lost
By Matt Moreno
By Matt Moreno
March 21, 2016
Northern Iowa was up by 12 with 34 seconds to go in the game and somehow let Texas A&M back into it. The Aggies won 92-88 after two overtimes.
SHOW TRANSCRIPT

Texas A&M is headed to the Sweet 16, but it's coming at the expense of Northern Iowa.

"Just when I thought I was about to be sent home, about to start crying on the bench, here I am in the Sweet 16," Texas A&M's Jalen Jones said.

"We should be moving on. Credit them for making some plays, but we were 30 seconds away," Northern Iowa's Matt Bohannon said.

On Sunday, the 11th-seeded Northern Iowa Panthers were up 69-57 with 34 seconds to go in the game and on the brink of upsetting the No. 3-seeded Texas A&M Aggies.

It was a pretty safe lead. The Panthers had better than a 99-percent chance of winning the game. All they had to do was safely inbound the ball a few times.

Fast-forward 34 seconds and four turnovers, and the Aggies were able to tie things up and force two overtimes. Texas A&M ended up winning 92-88.

To give you an idea of just how quick of a turn the game took, check out this game trend graph from FiveThirtyEight. That sudden gap closure is that comeback.

Texas A&M will take on No. 2-seed Oklahoma on Thursday.