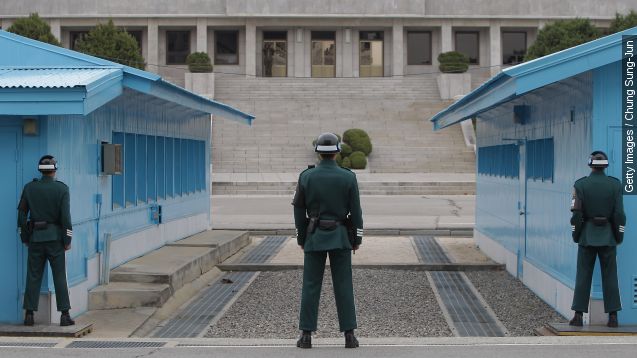 An unnamed North Korean soldier has defected to South Korea according to local reports.

The teenage soldier crossed from North to South Korea in the demilitarized zone near Hwacheon, Gangwon Province on Monday. A South Korean Ministry of Defense official confirmed the news to state run news agency Yonhap, saying the soldier crossed on foot and "expressed his will to defect."

Al Jazeera reports while there's more than 1,000 defectors from North Korea every year, most go through China and then into South Korea. A soldier defection at the DMZ hasn't happened since 2012.

Aside from the military personnel already patrolling for defectors, the area's also littered by landmines there since the Korean War. Yonhap reported Sunday North Korea has been planting additional landmines there in recent months specifically to prevent soldiers from defecting.

Not surprisingly, there was no mention of the military defector on the North Korean-run state news agency's website.

This video includes images from Getty Images and Dom Pates / CC BY 2.0.