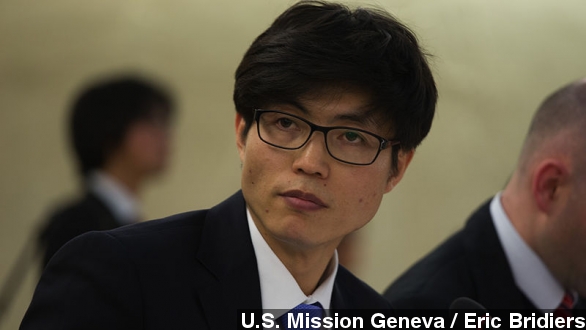 Shin Dong-hyuk's apparent years-long torture, the execution of his brother and mother and his eventual escape from a harsh North Korean concentration camp was the subject of best-selling 2012 book "Escape from Camp 14," authored by former Washington Post writer Blaine Harden.

While Shin does say his story is mostly true, he admits there are a few inaccuracies in it.

Shin said via The Washington Post: "When I agreed to share my experience for the book, I found it was too painful to think about some of the things that happened. So I made a compromise in my mind. I altered some details that I thought wouldn't matter. I didn't want to tell exactly what happened in order not to relive these painful moments all over again."

Shin was actually transferred to a different camp, Camp 18, when he was about 6 years old. In the book, Shin recalls all the events taking place in Camp 14. He also admits he escaped from camp twice before but was caught. He also says he was held underground, burned and tortured at age 20 for escaping — not at age 13 as the book states.

Shin has received numerous awards for his bravery and has also spoken on United Nations panels about the atrocities of North Korean prison camps.

The New York Times writes this admission could hinder an already difficult campaign to get a formal International Criminal Court investigation of North Korea's prison camps. An unidentified former Camp 18 prisoner also tells the outlet Shin is still lying: "You just cannot escape a North Korean prison camp twice, as he said he did, and is still alive and manages to escape a third time, this time from the total-control zone."

North Korea's government has already tried to discredit Shin's claims, posting a video titled "Lie and Truth," which features Shin's father saying his son was lying and never lived in a prison camp.

The Washington Post attributes Shin as being "the only person known to have escaped from one of North Korea's total-control zones" and is sticking by Shin, quoting a human rights executive director as saying, "The critical points of the book remain true."

The revelations come after Harden heard Shin had told friends a different account of his time in the camps and his escape. It's still unclear if "Escape from Camp 14" will be pulled from store shelves.