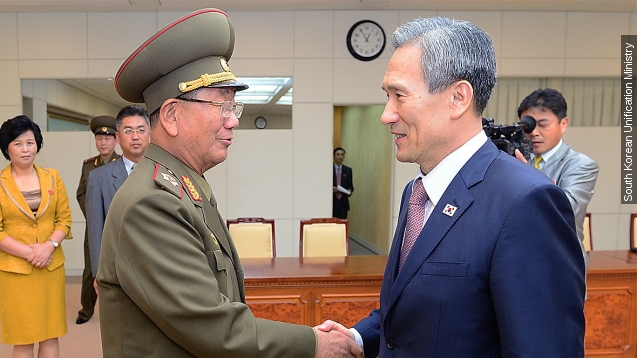 SMS
North Korea's Threats Win It Some Peace And Quiet At The DMZ
By Matt Picht
By Matt Picht
August 24, 2015
South Korea was blasting a mix of news reports, anti-Pyongyang messages and Korean pop songs across the DMZ.
SHOW TRANSCRIPT

The latest border crisis between North and South Korea has been resolved, and North Korea managed to achieve its main goal: getting the plug pulled on South Korea's massive propaganda loudspeakers.

The speakers, which blasted a mix of news reports, anti-Pyongyang messages and Korean pop songs across the DMZ, were erected by South Korea in mid-August after two soldiers were wounded in a mine attack. (Video via Yonhap News Agency)

For almost driving two countries to the brink of war, the propaganda broadcasts were pretty mundane. But North Korea reacted with artillery fire, counter-propaganda and threats of an all-out military assault.

That's because North Korea views the broadcasts as "psychological warfare." The messages are targeted at North Korean border troops and undermine the regime's stranglehold on information.

One academic told The Washington Post, "The speakers are slandering their leader and it's reprehensible, so everyone involved needs to be able to report back to Pyongyang: 'I just screamed at the South Koreans for 24 hours and told them to take the speakers down.'"

Cross-border information warfare has been part of the relationship between North and South Korea since the Korean War unofficially ended in 1963. The border region is crowded with jamming signals and competing radio and TV broadcasts. (Video via CNN)

And activists have found some creative ways to subvert the North Korean ban on foreign media. (Video via NTDTV)

But massive loudspeakers haven't been used since 2004, when they were dismantled as part of a peacemaking effort. (Video via Arirang)

In exchange for getting the speakers switched off, North Korea promised to end its military provocations and restart cross-border reunions between divided families.

This video includes images from the South Korean Unification Ministry.