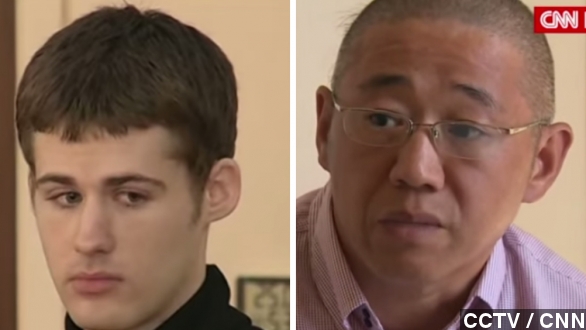 The U.S. State Department put out a statement on their release saying Director of National Intelligence James Clapper "engaged on behalf of the United States in discussions with [North Korea]." The statement did not say when they would make it back to the U.S.

Very little is known about what kind of negotiations took place between Clapper and North Korean officials, but as The New York Times points out, he is not the traditional choice for such a mission.

“Gruff and blunt-speaking, the retired general is an unlikely diplomat but, in the words of one American official, “perfect for the North Koreans.”

"At the time I did what I felt I had to do." This release comes less than a month after the release of Jeffrey Fowle who was detained by North Korean officials for leaving a Bible in a nightclub.

Bae was imprisoned more than two years ago in North Korea while guiding a tour through the country. North Korean officials have suggested Bae was detained for crimes against the state and for trying to topple the North Korean government. He was sentenced to 15 years of hard labor. (Video via ABC)

"For the last month and a half my health ... It's been failing."

Bae's family has pleaded for his release making multiple appearances on television and pushing their advocacy website.

Matthew Todd Miller was arrested in April 2014 and sentenced to six years of hard labor. North Korea alleges Miller was planning to be a "Second Snowden" by leaking classified information. They also claim he entered the country illegally hoping for asylum. (Video via CCTV)

After holding Bae for two years and then releasing three American prisoners in a matter of weeks, many analysts believe North Korea’s apparent “change of heart” is a means to an end.

Back in February, the United Nations condemned the authoritarian nation for human rights abuses and is still pushing to get Kim Jong Un summoned before the International Criminal Court. (Video via KCTV)

The State Department has not specified if North Korea received any aid or favors from the U.S. government in exchange for the two prisoners' release.