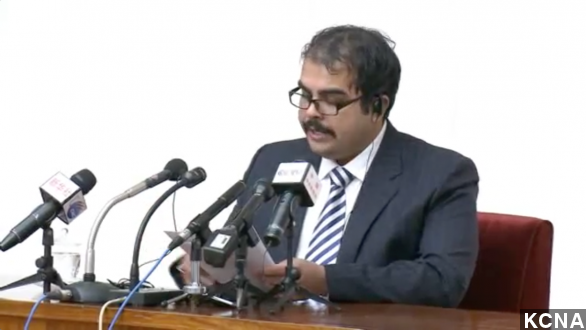 James Clapper just can't catch a break. No sooner does the Director of National Intelligence help retrieve two Americans from the clutches of repressive North Korea, then another one goes and gets himself ensnared.

"I would like to reveal some facts about America's imperialistic influence and dominance, as well as much of its corrupt and threatening practices through which it has proven itself to have little to no regard for human rights or serving the greater good."

That was Arturo Pierre Martinez, a 29-year-old El Paso resident, giving a press conference to North Korea's state-run media during which he heavily criticized the United States' human rights record.

Martinez told the cameras he entered the country illegally from China by crossing the Yalu River. During his speech, he thanked the government for pardoning his crimes, indicating he won't be charged for illegal entry.

His condemnation for the U.S. touched on familiar controversies like the war in Iraq, economic disparity, and the unrest in Ferguson, Missouri. The New York Times notes he also "warned of 'extremely dangerous and subversive technologies' related to U.F.O.s," which inexplicably hasn't made the headlines.

CNN spoke to Martinez's mother, who said her son is bipolar and left for North Korea after being released from a California psychiatric ward. "He is very smart and he got the court to let him out, and instead of coming home to us he bought a ticket and left for China."

Martinez apparently tried to enter North Korea once before; it's possible he is the same U.S. citizen who tried to ford the river separating North and South Korea back in September. South Korean officials stopped that unidentified man and shipped him back to the U.S.

North Korea has a history of detaining U.S. citizens and coercing anti-American confessions from them, but it's not clear if Martinez was speaking under duress or whether he's free to leave the country.

As for why North Korean officials decided to broadcast his remarks — it might have something to do with recent actions against the country by the United Nations, which voted in November to recommend prosecuting North Korean leader Kim Jong Un in the International Criminal Court for human rights abuses.

That resolution has been resoundingly condemned by North Korea, which argues it's being treated unfairly by the international community. The isolated state has often tried to shift focus from its own human rights violations onto the U.S.

"Very valuable for them to have an American citizen saying the things he's saying, because now they can broadcast that to their own people and to the rest of the world to make their case against the United States," a CNN report noted.

Again, it's not clear if Martinez is free to leave the country, but he says he plans to seek asylum in Venezuela.