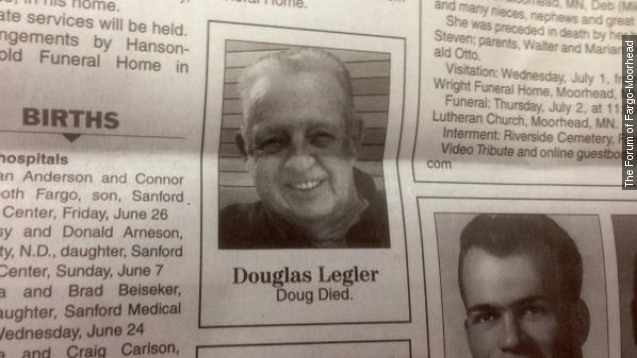 It's perhaps the shortest obituary we've ever seen.

An obituary that ran in The Forum of Fargo-Moorhead for Douglas Legler simply read "Doug Died."

Now it turns out that wasn't a mistake on the part of the newspaper or Legler's family. Legler really wanted it to be that short.

"Just wanted it short and sweet. ... He just came up with it and said 'All I want is "Doug died,"'" Janet Stoll, Legler's daughter, told WDAY.

Multiple outlets seem to agree that Legler's obituary was "perfect."

On its website, the newspaper went into a bit more detail about Legler, writing the 85-year-old died June 27.

The Forum of Fargo-Moorhead even published a separate feature on Legler. His daughter told the publication: "He was very quick-witted, and funny. He was one of a kind. ... Everyone loved him that met him."