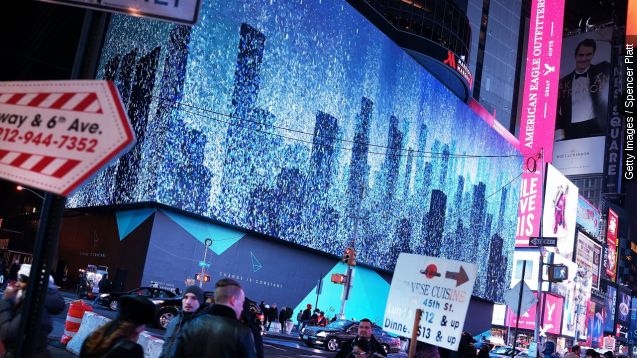 The biggest billboard in North America has just been installed in The Big Apple. Seems fitting, right?

NORA O'DONNELL VIA CBS: "Look at this! It's about the size of a football field. It features nearly 24 million pixels with a higher resolution than most high-definition TVs."

Yeah, when we said biggest we meant massive.

Did you notice that it's so big it actually wraps around the sides of the Marriott Marquis Hotel?

And use of this billboard to advertise won't come cheap.

That makes it one of the most expensive billboards in the country, as well.

Back in 2012, Ad Age reported Dunkin' Donuts paid $3.6 million for one year of its Times Square billboard. And Anheuser-Busch paid $3.4 million. But remember, that's for an entire year, as opposed to $2.5 million for just one month.

According to The New York Times, the 25,000 square foot billboard currently displays a digital art exhibition. Next Monday, though, Google will begin an advertisement on the screen, which will run into 2015.

But this Times Square billboard still doesn't measure up to the world's largest in Saudi Arabia.