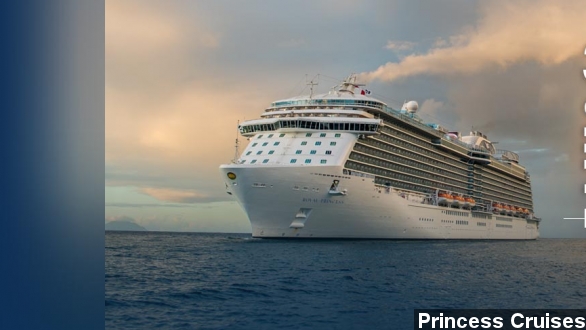 By Jasmine Bailey
January 31, 2014
The third cruise ship this year had to dock early because of illness among passengers. Some 170 people got sick on the Caribbean Princess.
SHOW TRANSCRIPT

Hundreds of passengers on yet another Caribbean cruise ship have come down with a nasty stomach bug.

"They were carrying more than 3,000 passengers ... a crew of more than 1,000. At least 173 people on the Caribbean Princess believed to be sick from the norovirus." (Via CNN)

The Caribbean Princess Cruise ship left Houston Jan. 25 and was bound for the Caribbean. However, the ship was forced to turn around and come back Thursday, a day early.

"The Princess line originally said the cruise was being cut short a day because of fog but now admits the illness has also played a role." (Via WFLD)

The Centers for Disease Control and Prevention is investigating the outbreak, which some suspect could be norovirus. The illness is extremely contagious and causes vomiting and diarrhea.

"Norovirus survives on surfaces and on hands. It is a virus that is very hard to disinfect. Up to two to three weeks after you start feeling better, you still are considered contagious." (Via ABC)

This is the third outbreak on a major cruise ship this year alone.

"The Explorer of the Seas returned to New Jersey on Wednesday, also earlier than expected. The trip cut short after nearly 700 people got violently ill." (Via Fox News)

That was a record number of people to get sick aboard a cruise ship. Those passengers are now back on dry land. (Via NBC)

And in mid-January, dozens of passengers became sick on a different cruise run by the same company — Royal Caribbean — after spending four days in the Bahamas. (Via WRAL)

Passengers aboard the Caribbean Princess will receive a 20 percent discount toward a future cruise. The ship is being cleaned for its next trip, which is set to depart this weekend.