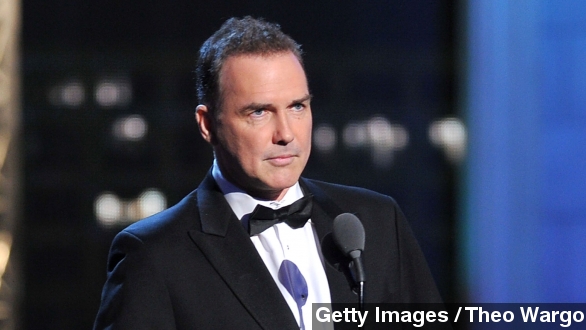 We all let out a collective "WHAT? That was it?!" Sunday night when Eddie Murphy returned to the "Saturday Night Live" stage for the first time in more than 30 years.

"This show is such a big part of who I am and my life, and I am so happy to be back here." (Video via NBC / "Saturday Night Live 40th Anniversary Special")

That was it. So, why did Eddie Murphy — known as one of "SNL"'s best performers ever — not perform?

The "Celebrity Jeopardy" sketch was one of the night's highlights, and MacDonald said there had been an idea... (Video via NBC / "Saturday Night Live 40th Anniversary Special")

"An idea that would blow the show wide open."

The idea was to have Eddie Murphy play Bill Cosby. But Kenan Thompson ended up doing it...

"Okay, now, this potent potable is one proud mamma jamma."

MacDonald said he tried to convince Murphy to do it, that Murphy knew the bit would "bring the house down" with him in it.

But "Eddie decides the laughs are not worth it. He will not kick a man when he is down. ... Eddie does not need the laughs. Eddie ... is the coolest, a rockstar even in a room with actual rockstars."

Since Sunday, there's been plenty of speculation about Murphy — about why he didn't perform, and why he seemed to freeze up a bit on stage.

We wondered about it too — and look — this story from MacDonald still doesn't explain why Murphy didn't do anything with the show, because they probably would have let him do anything he wanted. But it's nice knowing he didn't want to do a bit that would be, frankly, kind of easy.

And maybe Murphy just wanted a homecoming. Here's what he said on the red carpet:

"You know, it's a lot like going back to your old high school, and everything seems really tiny, that kind of thing." (Video via NBC / "Live from the Red Carpet: SNL 40th Anniversary Special")