This Drug-Themed Fashion Collection Was Kind Of A Flop 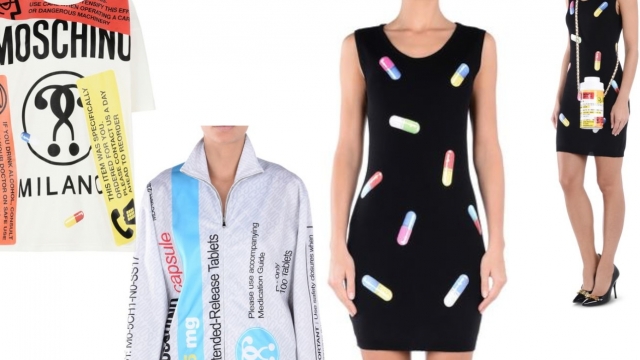 SMS
This Drug-Themed Fashion Collection Was Kind Of A Flop
By Katherine Biek
By Katherine Biek
October 11, 2016
The designer drew inspiration from "the packaging and inserts of over-the-counter medication."
SHOW TRANSCRIPT

Shoppers know that when they walk into a Nordstrom store, it'll be filled with clothes and accessories from big-name designers.

But designer Jeremy Scott's most recent collection for Moschino isn't among the goods for sale.

Scott's spring/summer 2017 collection definitely raised eyebrows when it appeared on the runway during Milan Fashion Week in September. Yeah, those are supposed to look like prescription pills all over her purse.

According to Moschino's website, the designer drew inspiration from "the packaging and instructional inserts of over-the-counter medication."

The collection, titled #JustSayMoschiNO, features a $950 pill-bottle purse, a $995 mini dress featuring a drug warning label and a $495 sweatshirt that said, "Please use accompanying medication guide."

But not everyone thought the collection was as playfully tongue-in-cheek.

A drug and alcohol counselor started a Change.org petition to convince Saks Fifth Avenue and other retailers to not sell the collection, saying it "will most likely promote more drug use."

The U.S. is currently experiencing a drug overdose epidemic. According to the Centers for Disease Control and Prevention, a record number of people died of drug overdoses in 2014.

More than 47,000 people died of overdoses that year. The CDC says 61 percent of those deaths involved the victim taking some sort of opioid, which includes prescription pain medication.

While Saks Fifth Avenue is still selling the Moschino collection on its website, Nordstrom has removed it.

Nordstrom is still selling other Moschino clothing and accessories, though.

Scott has certainly flirted with other controversial topics in his collections before.

One he showed in February had a cigarette motif.