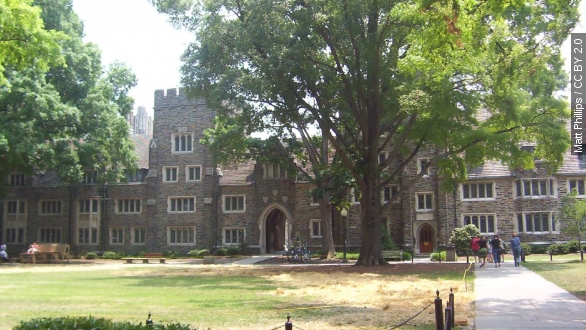 Duke University says one of its undergraduate students has admitted to hanging a noose from a tree on the school's campus.

This yellow rope tied into a noose was found early Wednesday morning. The University would not reveal the identity of the student in accordance with federal law but said in a statement he is "no longer on campus."

"The student will be subject to Duke student conduct process. The university continues to review the circumstances of the incident to determine if additional individuals were involved," Duke University Vice President for Public Affairs Michael Schoenfeld said.

"We're not afraid, and we stand together!"

Many students and faculty later marched on campus to protest the racially-charged incident.

Duke's President expressed outrage while speaking to a gathering of about 1,000 people and said those actions would not be tolerated. (Video via WRAL)

"I, as a person, and I, as the President of Duke University, find this symbol and what it symbolizes abhorrent. ... This University repudiates racism in all its forms," Brodhead said.

According to CBS, the group that released the photo of the noose, the Duke People of Color Caucus, was established after Sigma Alpha Epsilon fraternity members at University of Oklahoma were caught on video singing a racist song two weeks ago.

The University of Oklahoma came down hard on the fraternity shortly after; its chapter on Oklahoma's campus was closed and two students, who are believed to have played an instrumental role in the racist chants, were expelled. (Video via PBS)

Federal officials have launched an investigation into the incident at Duke to see if other parties were involved. The student who admitted to the act could face criminal charges.