Non-Browning GMO Apples Get The OK In U.S. 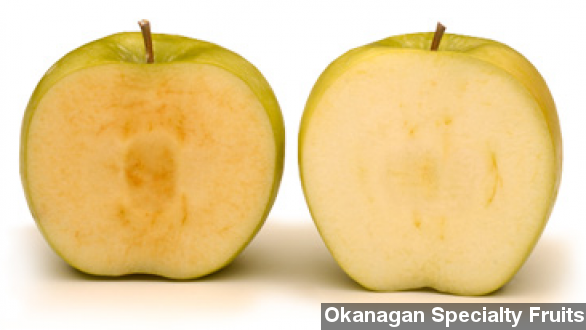 SMS
Non-Browning GMO Apples Get The OK In U.S.
By Jake Godin
By Jake Godin
February 14, 2015
Non-browning apples have received the go ahead from the U.S. Department of Agriculture in the U.S., but not everyone is big on GMO apples.
SHOW TRANSCRIPT

Specifically, two “Arctic” apple variants produced by Okanagan Specialty Fruits in British Columbia, Canada. As you can see here — they do not brown. At all. It’s kinda weird.

What makes Arctic apples different is that the genes responsible for browning ordinary apples are essentially turned off in this GMO version. The company explains that’s really the only difference between both types of apples. (Video via Okanagan Specialty Fruits)

Okanagan told The Wall Street Journal the company thinks its apples will be popular in places where sliced apples are displayed and sold such as grocery stores, airlines or restaurants. (Video via Kin Community)

Now, Okanagan Specialty Fruits is just waiting on an approval letter from the Food and Drug Administration determining whether the apple is safe for consumers.

But not everyone is on board with the idea of buying GMO produce, let alone a non-browning apple.

Speaking to The New York Times, the co-owner of Rice Fruit Company says he doesn’t think there’s any room in the marketplace for genetically modified apples. There’s also concern whether GMO apples will sour the image of non-GMO apples.

That’s because GMO products don’t exactly have a fresh image in the consumer world and are prone to protests, especially when larger corporations like Monsanto are involved. (Video via ReasonTV)

Particularly in parts of Europe, where governments and consumers alike have come out against GMO crops. (Video via YouTube / Ewinia1)

This actually isn’t the first non-browning piece of produce to seek approved by the U.S. Department of Agriculture either. In November, a GMO potato being developed by J.R. Simplot received approval.

Whether people decide to buy them or not, Arctic apples will most likely be here to stay if they get FDA approval. Okanagan says they won’t be available until at least 2016 in small amounts with larger quantities being rolled out later.