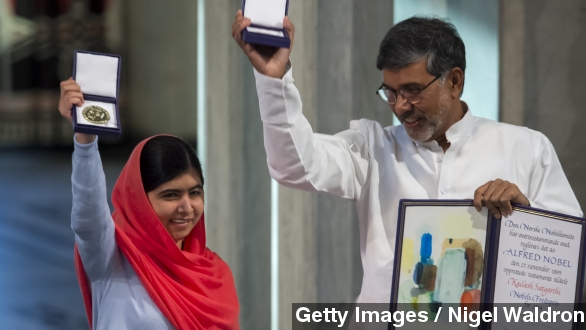 Malala Yousafzai received her Nobel Peace Prize in Oslo on Wednesday, but she wasn't alone.

Although Yousafzai naturally attracted more attention — she's the youngest laureate ever, and her shooting in 2012 made headlines globally — the two have something in common: They both work on behalf of children. (Video via Nobel Foundation)

Satyarthi said, "I refuse to accept that all the temples and mosques and churches and prayer houses have no place for the dreams of our children."

For more than 30 years, Satyarthi's work has included leading raids on factories and mines in India that often bind whole families into forced labor, and he has reportedly freed tens of thousands of children. (Video via The Guardian)

Yousafzai has focused her efforts on the education of children, girls in particular, and it was because of her vocal support for children's right to be educated that the Taliban tried to kill her. (Video via World Bank)

The pair's recognition this year is especially significant considering the United Nations says 2014 has been one of the worst years for children around the world.

A report the UN Children's Fund, UNICEF, put out this week detailed how the number of international crises, from the Ebola outbreak in West Africa to the rise of ISIS, have piled on and interrupted the lives of millions of children. (Video via UNICEF)

"As many as 15 million children are caught up in violent conflicts in the Central African Republic, Iraq, South Sudan, the State of Palestine, Syria and Ukraine. ... Globally, an estimated 230 million children currently live in countries and areas affected by armed conflicts."

UNICEF also pointed out the sad irony that this report comes on the 25th anniversary of the Convention on the Rights of the Child, and said it was beholden on all nations to make 2015 better.