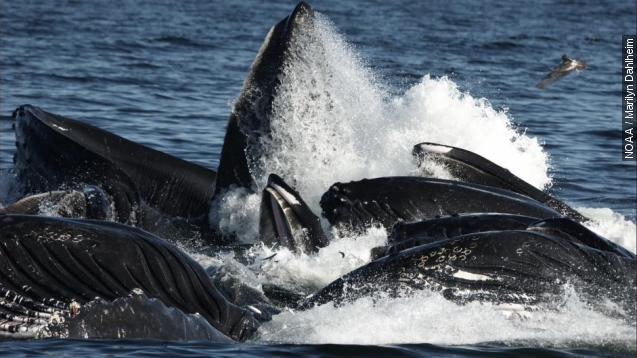 Whales in Alaska are dying at an alarmingly odd rate. Thirty individuals have washed up on Alaskan beaches in recent months.

The National Oceanic and Atmospheric Administration has opened an official investigation and classified the deaths as an “unusual mortality event:” involving unexpected stranding and significant die-off.

In the case of the fin whales, one scientist said "Part of the mystery is why just fin whales? Why not their prey? Why are there not other consumers in the system showing up in mass die-off mode?"

A spokesperson for NOAA told The Guardian at this point it looks like the recent and harmful algal bloom could be to blame, but there's still not enough evidence to support that yet.

This year's bloom of toxic algae is the worst in more than a decade, according to NOAA scientists. They suspect it could be linked to unusually warm temperatures in the northern Pacific ocean. (Video via University of California, Santa Cruz)

In the case of the whales, NOAA will post data from its investigation to its Unusual Mortality Event website once it becomes available. A full inquiry could take months or years of analysis. (Video via NOAA)

This video includes images from NOAA.