No, This Is It: The Most Detailed Scan Of Pluto We Have 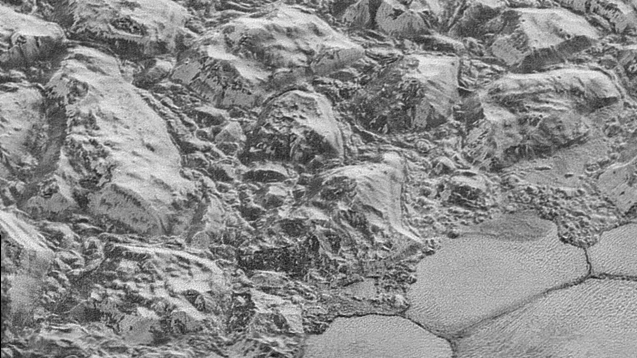 SMS
No, This Is It: The Most Detailed Scan Of Pluto We Have
By Evan Thomas
By Evan Thomas
December 5, 2015
New Horizons has sent back the first of its highest-possible-resolution images of Pluto's surface. Resolution won't get any better.
SHOW TRANSCRIPT

New Horizons has returned its best images of Pluto ever. This has happened a lot since July, but this time NASA means it.

The probe took these images 15 minutes before it made its closest approach to the dwarf planet. (Video via NASA)

Its cameras captured a resolution of 280 feet per pixel: about six times more detail than the global map of Pluto acquired in July.

"Nothing of this quality was available for Venus or Mars until decades after their first flybys; yet at Pluto we’re there already," said a New Horizons principal investigator.

Impact craters indicate distinct layers to Pluto's surface and could serve as a sort of geological time machine.

Mountains appear to have been moved into place: "somehow transported to their present locations" by external forces.

The New Horizons team will add more shots of the same caliber over the coming days.

But they won't get any clearer — at least not until we send another probe that way. (Video via NASA)