No, Really, We've Landed On The Moon 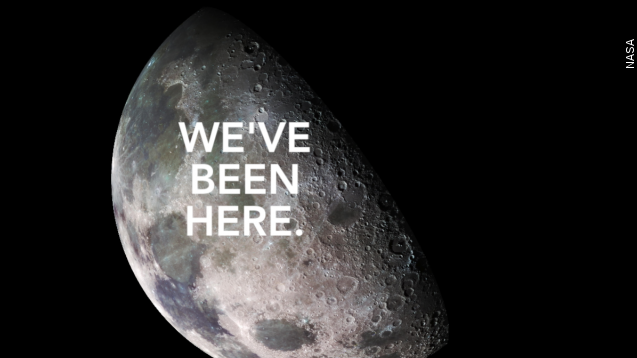 SMS
No, Really, We've Landed On The Moon
By Evan Thomas
By Evan Thomas
October 6, 2015
To this day, some claim the Apollo missions never sent men to the moon. But there's a lot of science that says yes, they did.
SHOW TRANSCRIPT

Twelve people have walked on the surface of the Moon during the Apollo program, at a cost of more than $25 billion.

Granted, it's not something everyone gets to experience. But to this day some claim it never happened: seven percent of respondents, in some polls collected as recently as 2013. (Video via NASA)

That's, uh, lunacy. Let's break down some of these arguments and beat them into submission with science. (Video via NASA)

First, one of the favorites: that American flag is waving in the breeze! There's no breeze on the airless moon, therefore this is fake. (Video via NASA)

No, this is inertia. As NASA explains, "Unfurling a piece of rolled-up cloth with stored angular momentum will naturally result in waves and ripples -- no breeze required!"

The Apollo 11 crew bent some of the rods intended to hold the flag out straight, which added some ripples. The Apollo 12 astronauts had the same issue. (Video via NASA)

Okay, but there's no crater at Lunar Module landing sites! How do you land 36,000 pounds of spaceship and astronauts without digging out a bunch of that moon dust?

First, gravitational acceleration on the moon is roughly six times weaker than it is on Earth, so the Lunar Descent Engine didn't have to work all that hard: closer to 6,000 pounds of thrust, rather than 36,000.

And the LEM throttled back as it approached the surface, to make landing as smooth as possible. Less thrust means less crater. (Video via NASA)

Sunlight reflects off objects on the moon the same way it does here on Earth. So all of these images and videos include light reflecting from Earth, the lunar module, and from the dust on the surface. (Video via NASA)

Which leads us to the complete lack of stars. Pretty amateur mistake by the set director, right? They should fire their art guys.

Actually, this is a matter of camera settings. Apollo astronauts had to set the cameras they used — these Hasselblad 500ELs — to properly expose the environment and the work they were doing.

You could probably ramp up the exposure to get dim stars in the background, but it would blow out everything else.

The astronauts would start looking like beings of pure luminous energy wandering the moonscape, which is an entirely different conspiracy theory. (Video via NASA)

Okay, so what about the bootprints? They're perfect. Too perfect. Done-ahead-of-time-in-concrete perfect.

You can thank dust for this one. Specifically, Lunar regolith. Individual granules of it are spiky and abrasive, closer to volcanic ash than beach sand.

This means it packs together really well, and the absence of any wind on the surface — we've been over this, there's no atmosphere for wind — means those footprints won't degrade anytime soon.

Bonus evidence: You can only get a hammer and a feather to fall at the same speed in a vacuum. Know what you can't reliably stick in a vacuum? A film crew. (Video via NASA)

And the Lunar Reconnaissance Orbiter can see the footpaths and installations of the Apollo missions.

You could always ask Buzz Aldrin to prove it, but he has been known to punch deniers who get too persistent. Your call.

This video includes images from NASA and Getty Images and music from Birocratic / CC BY 3.0.