No, Pope Francis Is Not A Marxist 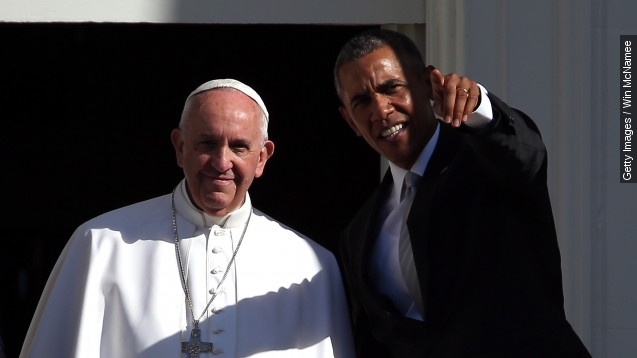 Is Pope Francis a Marxist?

"Man, this new Pope, of all the popes I've seen, is just a Marxist — no other way to look at it," radio host Alex Jones said on his show.

"The holy father is a challenge for traditionalist Roman Catholics — somewhere between a communist and a Marxist," Andrew Napolitano said on Fox Business.

Allegations that Pope Francis is a Marxist are nothing new, but they've been flying thick and fast with his visit to the U.S. (Video via Vatican)

"We've got what is undeniably a very leftist pope, very Marxist, coming out of South America," a caller said on C-SPAN.

But he's not one. In fact, he's a traditionalist himself, and the tradition that he's following predates Karl Marx by a few hundred years.

Pope Francis is a Jesuit — a member of the Society of Jesus. St. Ignatius of Loyola founded the society in 1540 with a focus on education and a vow of poverty.

He's not only the first Jesuit pope, but also the first Francis, which sheds further light on his views. (Video via Channel 4)

The pope chose his name in honor of St. Francis of Asisi, founder of the Franciscan order of Catholicism. Six hundred years before Karl Marx, the original Francis rejected his wealthy family to live with and advocate for the poor, something Pope Francis has emulated.

And differently from how Karl Marx looked at the world, too.

Marx was a materialist, focused on the systems that govern capitalist societies while Francis would rather people focus on spirituality and religion than material wealth. (Video via History Channel, NBC)

So labeling the pope a "Marxist" seems less like analysis and more like the go-to for the sliver of the American right that has launched most of the accusations. The rest of the world is pretty keen on the pope. But maybe they're all just a bunch of Marxists.

This video includes Getty Images and Frenic / CC BY 3.0.