No, Obama Isn't Having Another 'Katrina Moment' 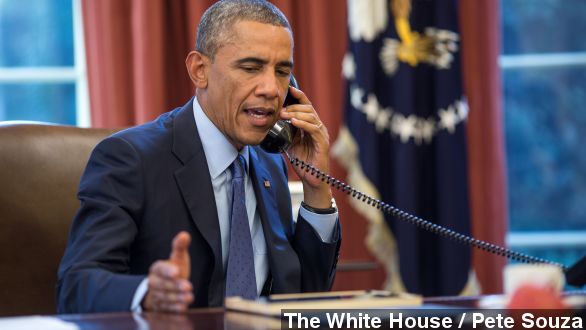 The federal government admits it could have responded faster to the spread of Ebola — and for some pundits, that can only mean one thing.

Yep, the K-word is again making the rounds. Some commentators are on the lookout for a misstep that will define Obama's legacy, the same way — for some — Katrina did for Bush. The comparison probably feels familiar. (Video via The White House, C-SPAN)

SEAN HANNITY VIA FOX NEWS: "With the horrifying images of Sandy's devastation, contrasted with images of Obama's campaigning, this is starting to look like in my opinion, Obama's Katrina."

KIRSTEN POWERS VIA FOX NEWS: "To me, Obamacare is his Hurricane Katrina."

It's an unflattering comparison that surfaces every so often in the media. At last count, Obama's had well over a dozen "Katrinas."

This time around, the label has again come mostly from the right, but some mainstream media outlets are also questioning how future generations will view Obama's handling of Ebola.

Justin Sink at The Hill likens the current situation to "an anchor threatening to sink the Obama presidency."

Really, though, the only thing Ebola and Katrina have in common is a delayed federal response. They differ in at least two big ways.

To start, one person has died of Ebola in the U.S. More than 1,800 died from Katrina and the storm's aftermath. (Video via CBS)

And yes, the CDC has admitted to some missteps in the way it's handled Ebola, but the criticism is more partisan and less widespread compared to the way FEMA was slammed for its slow and ineffective response to Katrina.

The other problem — it distracts from the real issues. As Talking Points Memo puts it: "Americans need level-headed information so that they know that their lives aren't imminently at risk because of Ebola. But you can't expect them to understand that if this is how the situation is being presented to them."

The Katrina comparison doesn't exactly put Ebola fears in context. A recent poll from Harvard found not only are Americans confused about how the virus is spread, but more than a third are also worried Ebola will affect them or a family member within the next year.