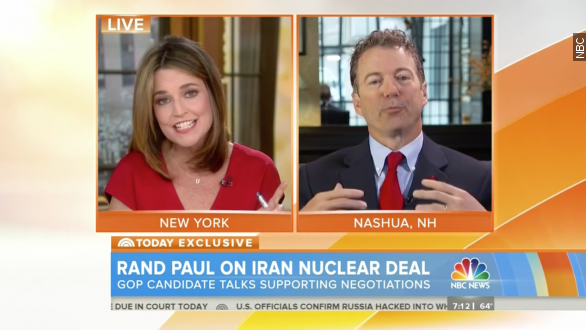 SMS
'No, No, No': Rand Paul Wasn't A Fan Of 'Today' Questions
By Danny Matteson
By Danny Matteson
April 8, 2015
"Today" host Savannah Guthrie pressed Paul about his views on Iran and aid to Israel, among other things. He didn't seem to be a fan of her approach.
SHOW TRANSCRIPT

Only about 24 hours after throwing his hat in the ring for the 2016 presidential race, Kentucky Sen. Rand Paul is already stirring up a little controversy.

Paul spoke to Savannah Guthrie on the "Today" show Wednesday morning — and it wasn't exactly a casual conversation.

Guthrie pressed Paul on his views on Iran and aid to Israel, among other things, claiming they'd changed over time. (Video via Office of Sen. Rand Paul)

And let's just say Paul wasn't a fan of the line of questioning. Here's a taste.

"Why don't we let me explain instead of talking over me, OK," Paul said. "Why don't you ask me a question: Have I changed my opinion?"

"Have you changed your opinion?" Guthrie asked.

"No, no, no, no, no. You've editorialized. Let me answer a question," Paul said at another point in the interview.

The tense conversation ran about six minutes, with Paul at times attempting to tell Guthrie how she could have better conducted the interview.

That led to Salon accusing him of going "full mansplainer" on Guthrie.

Paul has had less contentious interviews since his announcement. He spoke with Sean Hannity on Fox News Tuesday night.

But he has had media dust-ups before, including this awkward conversation with a CNBC anchor back in February.

"That’s incorrect," he said. "Wow, wow, wow. Let's go back again. Your premise in your question is mistaken."

"All right," the anchor said.

Paul gave his "Today" interview from New Hampshire. He was visiting the state as part of a national tour following his presidential run announcement. (Video via CNN)

Check out the full interview on the "Today" show's website.

This video includes an image from Michael Vadon / CC BY 2.0.