No Murder Charges For John Hinckley Over James Brady's Death 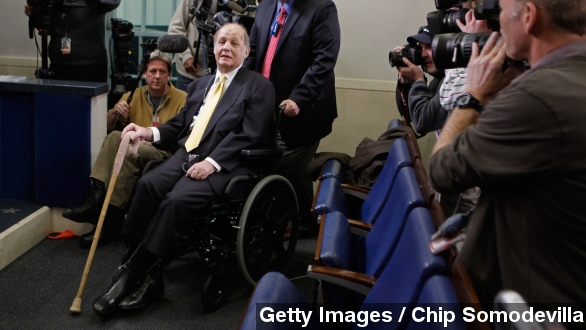 John Hinckley will not face murder charges for the death of former press secretary James Brady.

Hinckley shot and permanently injured Brady in 1981 when attempting to assassinate President Ronald Reagan. Reagan was also shot but recovered from his injuries. (Video via NBC)

Hinckley was found not guilty by reason of insanity and has been living in a psychiatric hospital ever since. (Video via MSNBC)

The case was re-opened after a medical examiner ruled Brady's death last August a homicide caused by injuries from the shots fired by Hinckley 34 years ago.

That opened the door for murder charges against Hinckley; but now prosecutors have decided against filing anything new.

NBC quotes prosecutors in the case who said that since a court had already ruled Hinckley legally insane "the government would be precluded now from arguing that Hinckley was sane at the time he shot Mr. Brady."

The Washington Post reports that Hinckley's attorney said in August there were "insurmountable legal barriers" with the case and stated the basic elements of the crime had not changed in the three decades since the shooting.

Brady was shot in the head, causing paralysis in his left leg and arm, memory loss and slurred speech.