The Internet, Tech Companies And Obama All Stand With Ahmed 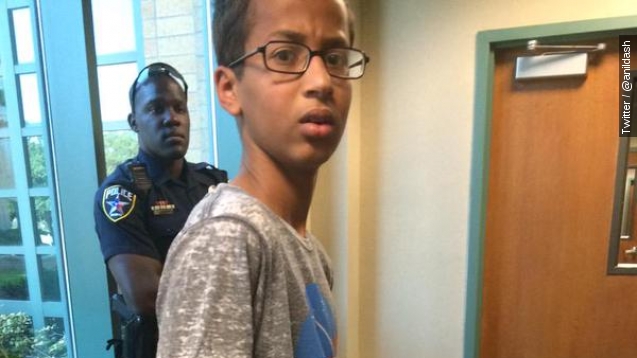 SMS
The Internet, Tech Companies And Obama All Stand With Ahmed
By Evan Thomas
By Evan Thomas
September 16, 2015
President Obama and tech leaders sent messages of support to 14-year-old Ahmed Mohamed after his controversial arrest for bringing a clock to school.
SHOW TRANSCRIPT

A 14-year-old boy was arrested in Irving, Texas, after his teacher mistook his homemade digital clock for an explosive device. Now, he has a few other platforms to show off his inventions.

President Obama extended a casual White House invite to Ahmed Mohamed in a tweet after the teenager’s story made its rounds on social media. Obama said, “We should inspire more kids like you to like science.”

Obama wasn’t alone. Facebook CEO Mark Zuckerberg and the account for Google’s online global science competition both sent invites to Ahmed, showing their support for his interest in technology. (Video via Google)

Social media users flooded networks with the hashtag #IStandWithAhmed, sending it to the top of Twitter’s trending topics. (Video via Twitter)

After his arrest, Ahmed spoke to news outlets about what happened.

"It was the first time I brought an invention to school to show to a teacher," Mohamed said.

"Fourteen-year-old Ahmed Mohamed rebuilt a digital clock over the weekend." (Video via WFAA)

The Dallas Morning News reports faculty called the police and pulled Ahmed out of class, and then he was placed under arrest.

"They searched me until my parents came, and I got to leave the building and the station. I went home and talked to my parents about it because I couldn't call my parents during the interrogation," Mohamed told the Dallas Morning News.

According to WFAA, the Irving police chief has since said no evidence "supports [the] perception he intended to create alarm" and said no charges would be filed.

But it appears there will be a case anyway: According to a Twitter account Ahmed and his family now run, they're in touch with a lawyer.