'No Bill, No Break': Dems Vow To Keep Pushing For Gun Control 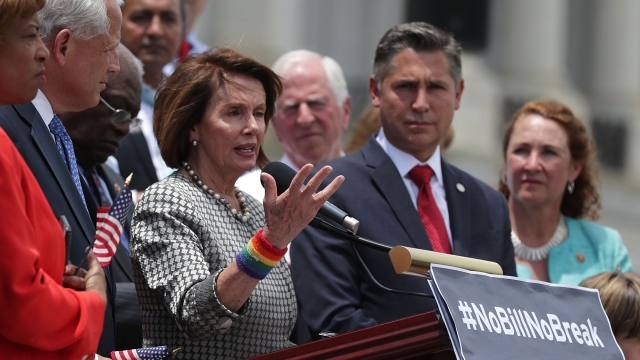 SMS
'No Bill, No Break': Dems Vow To Keep Pushing For Gun Control
By Ben Lawson
By Ben Lawson
June 23, 2016
Democrats staged a sit-in on the House floor on Wednesday and demanded a vote on gun control legislation.
SHOW TRANSCRIPT

House Republicans voted to adjourn the House of Representatives early Thursday morning despite a 16-hour-long sit-in from Democrats.

When Republicans tried to rush through business as usual, Democrats chanted, "No bill, no break."

The Democrats were seeking a vote on gun control after the mass shooting in Orlando. This sit-in comes a week after four gun control measures failed to pass in the Senate.

House Democrats pledged to continue the fight when the next legislative session starts in July.

House Minority Leader Nancy Pelosi said, "Just because they have left, it doesn't mean we have to take no as an answer."

Meanwhile, House Speaker Paul Ryan criticized the Democrats for having no "end-game strategy." He said in a statement: "The House is focused on eliminating terrorists, not constitutional rights of law-abiding citizens. And no stunts on the floor will change that."

Congress is back in session July 5.

This video includes clips from C-SPAN, CBS and Speaker of the House Paul Ryan and images from Getty Images. Music provided courtesy of APM Music.