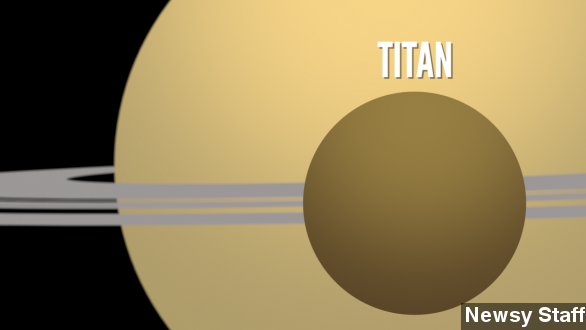 Here’s a theory for finding extraterrestrial life: look for stuff that doesn’t resemble organisms on Earth.

A team of researchers at Cornell University in New York have proposed a new model for living organisms, which could explain how something might live on the surface of Titan.

That’s Saturn’s largest moon. NASA says it’s a good candidate for extraterrestrial life, but anything that does live there isn’t going to look like life here on Earth.

For one thing, there’s no liquid water on Titan. Instead, the Cornell team proposes life there would take advantage of the moon’s oceans of liquid methane.

And second, it's cold in those oceans: negative 292 degrees Fahrenheit. Anything living there has to be able to function in temperatures that would freeze Earth life solid.

Thus, the theory calls for organisms with cell membranes made from the molecules present on Titan, mainly nitrogen. The researchers dubbed them azotosomes, from the French azote, meaning nitrogen, and the Greek soma, meaning body.

“The availability of molecules with an ability to form cell membranes does not by itself demonstrate that life is possible. However, it does direct our search for exotic metabolic and reproductive chemistries that would be similarly compatible under cryogenic conditions,” the researchers wrote.

The theory's Co-author imagines one day testing the theory, by “someday sending a probe to float on the seas of this amazing moon and directly sampling the organics.”

NASA seems to be thinking the same thing. It’s considered launching floating probes to Titan before, but keeping them running is an issue.

Solar panels like those used on the Mars rovers wouldn’t be reliable enough: the nitrogen atmosphere on Titan is thick enough to block a lot of sunlight.

The now-cancelled Titan Mare Explorer would have used nuclear power supplies, but they were deemed too expensive to develop.

NASA’s latest idea is a full-fledged submersible. The proposal, which is still just a concept, calls for an autonomous submarine that would float around in Titan’s methane seas.

It would presumably be able to search for the presence of hydrogen-based life while it’s there, but for now it’s still just an idea.

The Cornell team, meanwhile, has published its findings in the journal Science Advances.