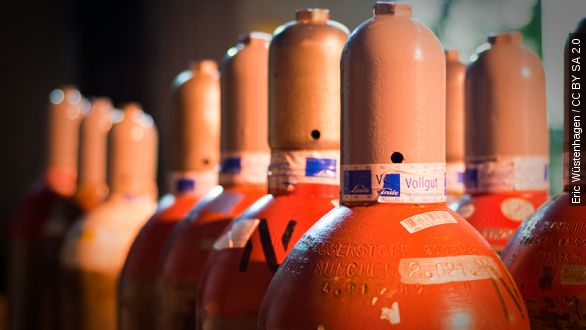 For the second time in its history of capital punishment, Oklahoma has become the nation's first state to adopt an execution method unused anywhere else. The first was lethal injection in 1977.

This time, it’s death by nitrogen. (Video via YouTube / grayfurnaceman)

Oklahoma Gov. Mary Fallin signed a bill Friday allowing for nitrogen asphyxiation to be used as a backup execution method.

In the new law, death by nitrogen asphyxiation — also called nitrogen hypoxia — would involve placing a mask on an inmate and switching out their oxygen supply with nitrogen instead, slowly asphyxiating them.

“...the person becoming unconscious within eight to 10 seconds and death a few minutes later. In other words, a humane, quick and painless death,” said state Rep. Mike Christian during a press conference.

That’s not to say lethal injection is being replaced in Oklahoma — it’s still the primary form of execution.

But after the state’s botched, 43-minute-long execution of Clayton Lockett last year, Oklahoma’s current lethal injection method may be struck down by the U.S. Supreme Court. Justices will begin hearing the case later this month.

State Rep. Mike Christian, who introduced the bill, told The Huffington Post in March death by nitrogen asphyxiation was “revolutionary” and says it’s cheaper than lethal injection, which he estimates costs around $500 per execution. (Video via Oklahoma State Legislature)

When asked how the state would obtain the nitrogen, Christian explained it'd be relatively easier than acquiring lethal injection drugs.

“Uh it wouldn’t be difficult at all considering that we breathe 78 percent nitrogen. That’s one of the problems that we’ve had in the past, our friends over on the other side of the Atlantic, the European Union, banned the export of the drugs that we need to administer lethal injection. So, my thoughts are, good luck banning nitrogen since we breath 90, er 78 percent nitrogen."

Critics of the penalty, however, say that “revolutionary” factor may be a problem, as that means using nitrogen asphyxiation to kill inmates remains untested.

Robert Dunham, the executive director of the Death Penalty Information Center, was critical of Oklahoma when speaking to The Washington Post, saying “The hasty manner in which this bill sped into law reflects the same lack of care with which Oklahoma has managed its execution process historically.”

There are some other factors to consider, as well. Speaking to Time, a pulmonary expert at NYU School of Medicine said an inmate executed via nitrogen asphyxiation may need to be sedated before being administered the gas. Otherwise, they could struggle to hold their breath and may, as he puts it, “freak out.”

States are becoming more and more willing to look for alternatives to lethal injection as a capital punishment method. Utah recently revived its use of firing squads while Alabama, Tennessee and Virginia are all attempting to bring back the electric chair.