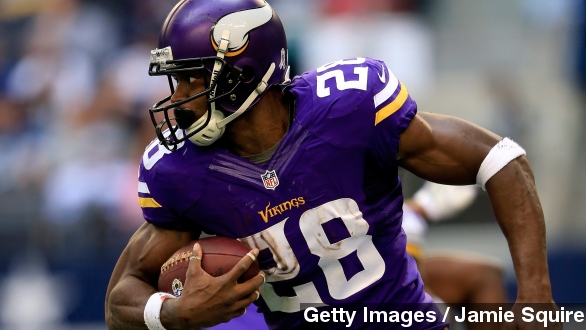 It's unlikely you'll see that trademark Nike swoosh on the side of Adrian Peterson's cleats again — that is, if he's even allowed back on an NFL field.

Tuesday, the footwear and apparel company dropped the Minnesota Vikings' star running back from his contract just days after Peterson submitted a no-contest plea for misdemeanor reckless assault. (Video via Nike)

ESPN's Darren Rovell first broke the news. He says Nike suspended its contract with the former two-time NFL MVP on Sept. 17 — shortly after Peterson was indicted — then opted to end their business relationship Thursday.

Rovell also points out "morals clauses in endorsement contracts" give companies more leeway to drop a player depending "on the level of transgression."

And Peterson's not alone here. Nike has been busy lately severing deals with some other marquee names whose reputation has been mired in scandals.

HOPE SOLO: "I have a fighter in me, kind of a fighting spirit and I can embrace that."
But there may a double-standard at play as well.

Nike has held on to soccer star Hope Solo, and she's also still taking the field for the U.S. national team despite her child abuse charges. No contract termination. No suspension. Nothing.

Something ESPN's Keith Olbermann has — oh, so gently — touched on before.

KEITH OLBERMANN VIA ESPN: "Domestic violence and child abuse are not just a men's game. And to insist that Hope Solo be removed immediately from her professional team and this national embarrassment that she represents this country in anything right now gets stopped."

The Hope Solo story isn't an isolated case either. Nike has run into some scrutiny for its handling of other athletes' contracts in the face of scandals before.

New York Jets QB Michael Vick resigned with Nike in 2011 nearly four years after he admitted to "being involved with a dog fighting ring" — an incident that landed him behind bars for 21 months.

That prompted a healthy dose of public outrage to boycott the world's largest sports apparel company.

However, as a Bloomberg contributor points out, many felt Vick's resigning was justified because he "paid his dues."

UNEQUAL TECHNOLOGIES CEO ROB VITO VIA BLOOMBERG: "He served his time, he paid his dues, President Obama reached out to him and gave him his endorsement and support and said, 'This is a country of second chances.' That's what makes this country great."

As far as Adrian Peterson goes, while the deal Nike is out, he remains on the NFL's exempt/commissioner's permission list — meaning he's off the field but still receives pay. The league is currently reviewing his case to determine if he'll be reinstated.