Scientists Are Pushing Ahead With Human-Animal Hybrid Research 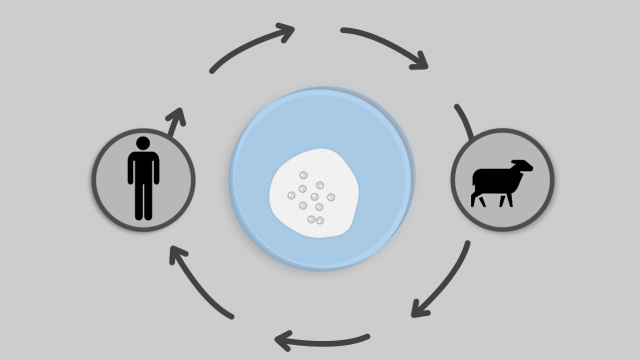 SMS
Scientists Are Pushing Ahead With Human-Animal Hybrid Research
By Steven Sparkman
By Steven Sparkman
August 4, 2016
The federal government has plans to fund human-animal hybrid research. Here's what that means and why it raises ethical concerns.
SHOW TRANSCRIPT

Lots of people are creeped out by the idea of scientists making human-animal hybrids in the lab, but the government's ban on funding the research turned out to be short-lived.

The National Institutes of Health plans to start funding hybrid research in early 2017, around a year and a half after saying scientists needed to slow down and consider the implications.

Understanding exactly what the NIH could be allowing can be tricky, though. Let's start with what's already considered normal in medical research.

Swapping body parts between humans and animals is commonplace these days. Thousands of people are walking around with pig valves in their hearts, for instance.

Scientists would eventually like to be able to give patients the pig's entire heart, not just a valve. When it comes to animal organs we might one day give people, pig hearts are the favorite option.

All kinds of animals have been given snippets of human DNA, too. It can make their parts more suitable for transplant and helps scientists study human diseases in the lab without needing to experiment on people.

So when it comes to mixing human and animal DNA, that genie is long out of the bottle. What the government has been stalling over is a step further: putting not just human DNA, but human stem cells into animals. Some scientists are already doing this using other funding sources.

The scientists engineer a pig or sheep embryo not to be able to make a certain organ, like the heart or pancreas. They then take human cells, usually skin from adults, make them into stem cells and inject them into the animal embryo to fill in the gap.

The animal would then be born with a human organ as part of its body.

In context, it doesn't look that different from what scientists have been doing for decades. But the difference between animals with some human DNA and animals with entire human organs is enough to raise a lot of ethical questions.

If you want the NIH to hear what you think, the agency will post its new guidelines Friday and give the public 30 days to comment.