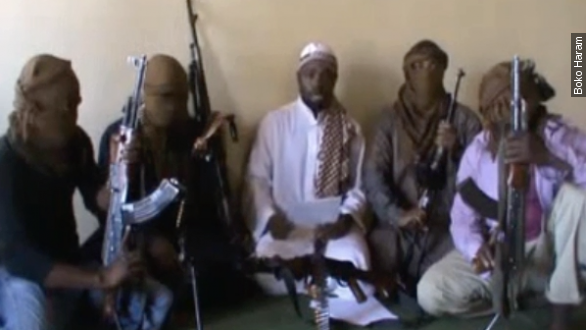 SMS
Nigerian Military Says Boko Haram Out Of Stronghold
By Kate Grumke
By Kate Grumke
March 27, 2015
Nigeria's military says it pushed Boko Haram out of a stronghold on the eve of presidential elections in the country.
SHOW TRANSCRIPT

On the eve of Nigeria's presidential elections, the country's military announced it had driven Boko Haram out of a stronghold.

In a tweet the Nigerian military said, "Troops this morning captured Gwoza destroying the Headquarters of the Terrorists self styled Caliphate."

The stronghold was thought to possibly be harboring some of the schoolgirls who were kidnapped last spring, sparking the "Bring Back Our Girls" campaign. But, that was based on one woman's testimony in Nigerian press who never actually saw the girls, but said she had heard that they were being kept in the town.

A coalition of militia from Nigeria and its neighbors has reportedly had some success in pushing back the group, which months earlier controlled a large swath of the country's North East.

Violence from Boko Haram was the reason the Nigeria's ruling party postponed the country's elections, which were originally supposed to happen on February 14.

But there are still some fears there will be violence as Nigerians vote, and more than one million Nigerians have reportedly been displaced because of Boko Haram, which could lead to difficulty voting.

The two main candidates running for president are Goodluck Jonathan, who is running for reelection, and Muhammadu Buhari, who once ruled the country as a military dictator.

Security, especially against Boko Haram, has been an important issue to Nigerians in the run-up to these presidential elections. If Jonathan's government has really gotten Boko Haram under control that would be a boon to his campaign.

Jonathan has received criticism for his inability to return the kidnapped Chibok schoolgirls and his delayed response immediately after they were reported missing.

Jonathan and Buhari also ran against each other during the 2011 elections. After Jonathan's win, Buhari's supporters rioted and more than 800 people were killed.

This time around, the candidates are reportedly neck and neck. Nigerians will head to the polls Saturday.