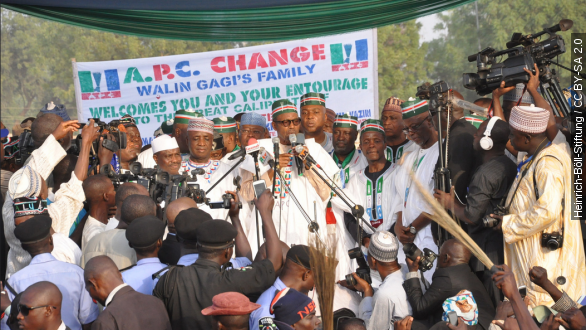 When Nigerians go to the polls Saturday, the ballot will look familiar.

When they ran against each other in 2011, Jonathan easily beat Buhari. This presidential election will be much closer. (Video via Office of President Goodluck Jonathan)

“Many people ask me why am I running for office again. And I ask them, 'What has changed since I began this mission? Can you honestly, truly say that our country has changed for the better?'” Buhari said in a campaign ad.

Buhari’s time as Nigeria's military dictator is remembered for its questionable human rights records and accusations of corruption. (Video via 2015 Buhari/Osinbajo Campaign)

“Let me assure you that if I am elected president, the world will have no cause to worry about Nigeria,” Buhari said during an appearance at Chatham House.

The 72-year-old says his experience makes him better suited to bail out Nigeria's struggling economy and — perhaps more importantly — take on Boko Haram.

That’s the Islamist terrorist group that recently pledged allegiance to ISIS and is responsible for killing over 10,000 Nigerian civilians last year, according to the Council on Foreign Relations.

His opponent, meanwhile, has been widely criticized for his handling of the insurgency.

Under Jonathan’s leadership, the military's stayed underfunded, underarmed and undertrained — no match for the increasingly well-equipped militants who know the terrain of their stronghold in northeastern Nigeria better. (Video via ENCA)

Back in February, Nigeria postponed the presidential elections for six weeks to fight Boko Haram. With the help of neighboring countries, the military says it's retaken dozens of towns from the militants since then.

"I call on all the candidates to make it clear to their supporters that violence has no place in democratic elections before, during or after the votes are counted,” President Obama said in a video message.

Both Jonathan and Buhari have pledged to respect the outcome of Saturday’s election. Allegations of voter fraud triggered riots during the 2011 race. Over 800 people were killed in a three-day period. (Video via TV2Africa)

This video includes images from Getty Images and Chatham House / CC BY 2.0.