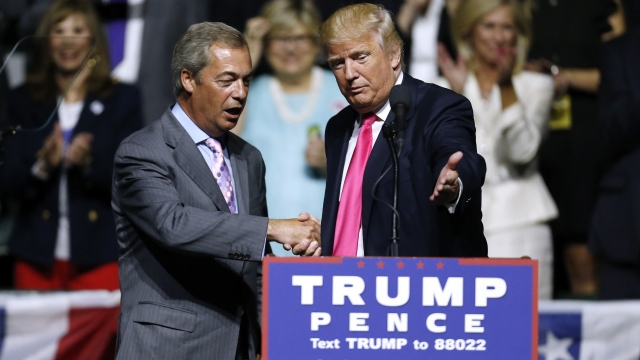 A rally for Donald Trump on Wednesday had a very special story time brought to you by none other than the real Mr. Brexit himself: Nigel Farage.

Farage was in Mississippi to help draw parallels between his successful campaign to convince Britain to leave the EU and Trump's campaign — especially when it comes to trusting the polls. Before the vote, Brexit looked like it wasn't going to happen and Trump's numbers right now say a Trump presidency isn't likely.

Farage told The Daily Telegraph, "The Republican activists and managers here are keen to hear the Brexit story, hear how we managed to get 2.5 million people who don’t normally vote at all to go down to the polling station."

Politicians from other countries typically stay out of American elections, at least physically. But the Brexit vote relied on some familiar global trends: rising nationalism, growing mistrust of the political establishment and nostalgia for a rosier past.

But relying on general global sentiment can only get Trump so far. He still has to reckon with the increasingly racially diverse U.S. electorate, which has been resistant to the nationalist pitch that carried the day in the U.K.

But if there's any year where U.K.-ish nationalist sentiment could hop the pond to America, it's 2016.