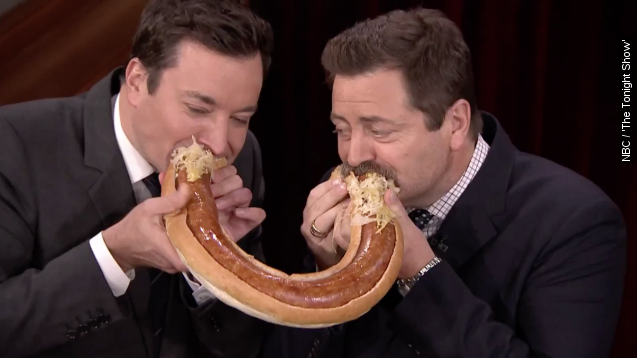 SMS
Nick Offerman's Meat-Only Diet Will Make Your Arteries Hurt
By Ben Lawson
By Ben Lawson
November 10, 2015
Nick Offerman has a fall diet that would pretty much make any meat lover jealous and horrify any nutritionist.
SHOW TRANSCRIPT

Nick Offerman has a fall diet that would pretty much make any meat lover jealous and horrify any nutritionist.

"If you want a salad with your brats, here are some Wisconsin cheese curds," Nick said on "The Tonight Show."

Nick needed to gain weight for his part in a stage adaptation of "A Confederacy of Dunces." And the diet he introduced to Jimmy Fallon on  "The Tonight Show" would certainly help you put on a few pounds, or even give a lesser man a heart attack.

"You may have heard of the turduken," Nick said.

"Yeah, it's a chicken carcass inserted into a duck carcass, which is then shoved inside of a turkey," Nick said.

But maybe Nick's body can take the punishment after all those years of playing the protein-loving Ron Swanson on "Parks and Recreation."

"You know what, I think I will have that third steak after all," Nick's character said on "Parks and Recreation."