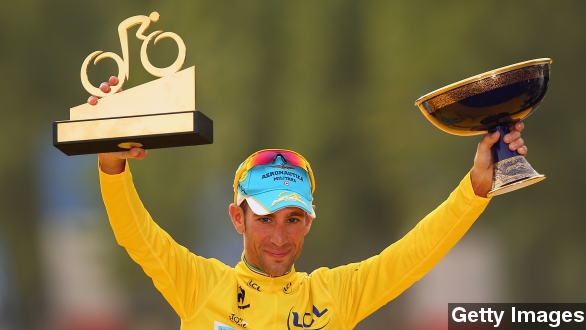 By Ben Lawson
July 27, 2014
Vincenzo Nibali became the first Italian in 16 years to win the Tour de France and only the sixth man to win all three of cycling's Grand Tours.
SHOW TRANSCRIPT

Nibali won four stages of the race, which no winner has done since Lance Armstrong won five stages 10 years ago. (Via Sky News)

Still, The New York Times writes that Nibali owes his victory, at least in part, to the misfortune of others.

Such as three-time champion Alberto Contador, who hit a sinkhole and broke his leg earlier in the tour. (Via Getty Images)

And last year's winner Chris Fromme, who withdrew from the tour during stage five due to a wrist injury. ESPN quotes him saying "I think Nibali definitely does deserve the win this year ... But I do believe it would have been a different race if Alberto and I had been competing in the mountains."

But Nibali's 7 minute 52 second margin of victory is hard to ignore. It's the largest margin for a Tour winner since 1997. (Via Getty Images)

The Guardian writes that with the help of his teammates the 29-year-old Sicilian dominated in the mountain stretches and rough weather conditions that sidelined other cyclists with injuries.

Two French men stood on either side of Nibali on the winner's podium, Jean-Christophe Péraud and Thibaut Pinot. This is the first time the host nation had two men on the podium since 1984. (Via Getty Images)

Nibali is only the sixth man to win all three of cycling's Grand Tours.