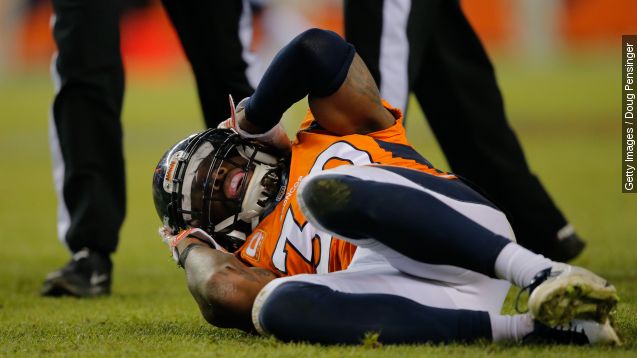 SMS
NFL Won't Listen To Neurologist's Findings On CTE — Sound Familiar?
By Matt Moreno
By Matt Moreno
December 22, 2015
The new seven-year study is being led by Boston University's Dr. Robert Stern, who has been critical of the NFL in the past.
SHOW TRANSCRIPT

"The NFL does not want to talk to you. You turned on the lights and gave their biggest boogeyman a name," another character says.

If there's one thing certain about the NFL, it's the league really doesn't enjoy talking about concussions.

And, according to ESPN, it really doesn't enjoy Boston University's Dr. Robert Stern, either.

"Stern is very well known and very prominent and very well respected. ... Some people wonder whether the NFL, which has a history of attacking independent scientists who have raised questions about the link between football and brain damage, might be doing more of the same here," ESPN's Steve Fainaru said.

The National Institutes of Health announced Tuesday the start of a new, seven-year study aimed at finding a better way to identify and diagnose chronic traumatic encephalopathy, or CTE, in living patients.

Right now, researchers know CTE is caused by repeated hits to the head, but the disease can only be identified after patients have died and scientists have a chance to examine their brains. (Video via Wired)

The study is being funded by a $16 million grant, with Stern serving as one of the principal investigators. But when the announcement came Tuesday, the NFL's name was noticeably absent. (Video via Boston University)

ESPN's "Outside the Lines" says that's because the "no strings attached" $30 million gift given to The Foundation for the National Institutes of Health (FNIH) in 2012 actually had some strings attached — veto power.

The "OTL" report says the NFL was originally on board with the study but backed out when it was awarded to Stern because there were "concerns about Stern's objectivity." Stern has been critical of the league in the past, and the NFL's decision not to fund the study reportedly delayed Tuesday's announcement for months.

While the NFL is denying the allegations levied by the ESPN report, the whole thing sounds like deja vu.

Sony's "Concussion" starring Will Smith details the life of neuropathologist Dr. Bennet Omalu and his struggle to get the NFL to recognize CTE. (Video via Columbia Pictures / "Concussion")

The NIH study will examine 120 NFL players and 60 former college football players for signs of CTE.