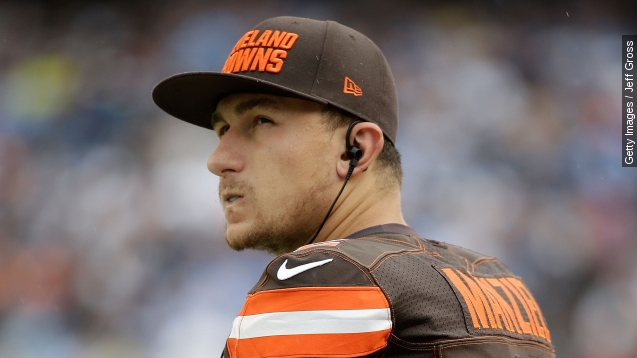 SMS
NFL Unlikely To Suspend Johnny Manziel For Domestic Argument
By Matt Moreno
By Matt Moreno
October 29, 2015
The Cleveland Browns quarterback and his girlfriend were pulled over in mid-October after two witnesses reported the couple fighting.
SHOW TRANSCRIPT

"What happened today? You guys were obviously in this car," an Avon police officer asks Johnny Manziel's girlfriend.

"He, like, I don't know. Hit me a couple of times," Colleen Elizabeth Crowley said.

"While you were were in the car?" the officer asked.

Cleveland Browns quarterback Johnny Manziel won't be disciplined by the team or the NFL for a domestic incident involving his girlfriend.

According to our partners at WEWS, Manziel and his girlfriend were pulled over by police in mid-October when two witness' phone calls said the couple were arguing. Manziel's girlfriend, Colleen Elizabeth Crowley, said he hit her.

She didn't press charges, and the only evidence police found was a scratch mark on her.

When news of the situation first broke, it seemed unlikely Manziel would be disciplined, even under the league's revamped domestic abuse policies.

WOIO reported: "Police were on the scene. They said this guy looked sober. There was no evidence that anything was done wrong, and the only witness they had, from what she could see, he kept her from diving out of a moving vehicle which would seem to be more of a positive than negative."

Manziel was active for the Browns' recent game against the Rams, a game in which the backup quarterback saw playing time.

In the mid-October incident, police didn't arrest Manziel, and no charges are pending.