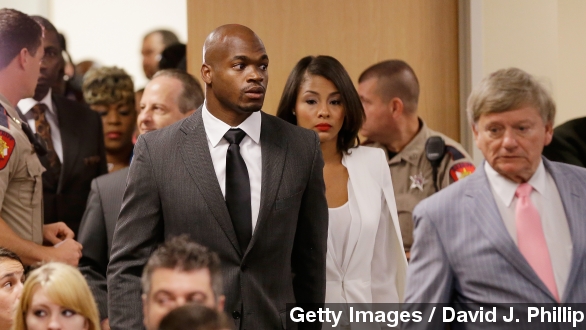 Adrian Peterson won’t be seeing an NFL field for the rest of 2014, as the NFL ruled Tuesday the Minnesota Vikings running back will be suspended without pay for the remainder of the season.

MIKE GREENBERG VIA ESPN: “He has been suspended without pay for atleast the remainder of the 2014 NFL season and will not be considered for reinstatement before April 15th.”

According to a letter to Adrian Peterson from the NFL, commissioner Roger Goodell told Peterson, “The timing of your potential reinstatement will be based on the results of the counseling and treatment program set forth in this decision. Under this two-step approach, the precise length of the suspension will depend on your actions.”

Over the last few days, Peterson has taken issue with the NFL’s review of his appeal under the league’s Collective Bargaining Agreement.

The 29-year-old Vikings running back was arrested on felony charges for reckless or negligent injury to a child after allegedly hitting his 4-year-old son with a switch — or small tree branch — in September.

Charges against Peterson were later reduced – he pleaded no contest to misdemeanor reckless assault on Nov. 4.. He received a $4,000 fine and community service but avoided jail time. (Video via CNN)

Peterson has been sidelined since the first game of the 2014 season and he’s missed nine games total. In his absence, the Vikings are 4-6 and tied for last place in the NFC North.

The NFLPA says it will appeal the decision and request a neutral arbitrator on the case.