NFL Scouting Combine Has Turned Into Quite The Spectacle 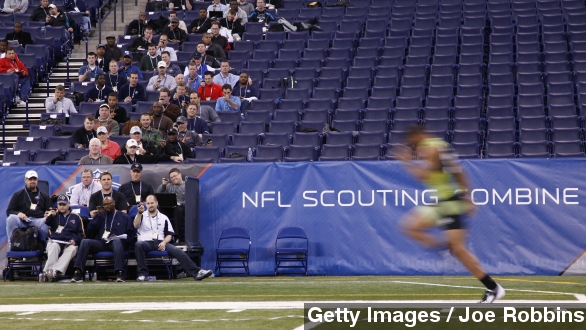 SMS
NFL Scouting Combine Has Turned Into Quite The Spectacle
By Jay Strubberg
By Jay Strubberg
February 18, 2015
323 potential NFL-bound standouts shed their helmets and padding to compete in what's basically football's adaptation of a track-and-field event.
SHOW TRANSCRIPT

The NFL Scouting Combine is underway as 323 potential NFL-bound standouts shed their helmets and padding to compete in what's basically the football adaptation of a track-and-field event.

For most fans, it's fair to say the combine isn't nearly as exciting as a regular game. That's a given.

But it does give coaches and managers an inside look at how key prospects are developing and staying fit before they hit the gridiron for real — factors that could affect how early some players are drafted.

Of course, all eyes will be on the fresh batch of premier quarterbacks — most notably Heisman trophy winners Jameis Winston and Marcus Mariota, though the former is still on the fence about whether he'll throw at the combine.

But ESPN's John Clayton says teams will probably be more concerned with Winston's level of maturity in light of his off-field antics.

As Clayton puts it, "Nailing the interview process is far more important than anything he does on the field."

Another key thing to keep an eye on: the record books.

Yep, the NFL combine record for fastest 40-yard dash set by Chris Johnson in 2008 could be in jeopardy. Man, we love our football, don't we?

Phillip Dorsett, Devin Smith and Sammie Coates seem to be — quite-literally — the front-runners to unseat Johnson and leave their mark on pre-pre-season history.

But there are some sports writers who believe the whole showcase is just that — a big show. A USA Today writer calls it "dumb" and says coaches can already assess players adequately using game film.

But the combine has built a growing audience and has managed to become a kind of sports spectacle in its own right.

He says that's because there's a "crossover audience" of college and pro football fans watching, along with huge growth in fantasy football where fans get a chance to stack their players up against one another.