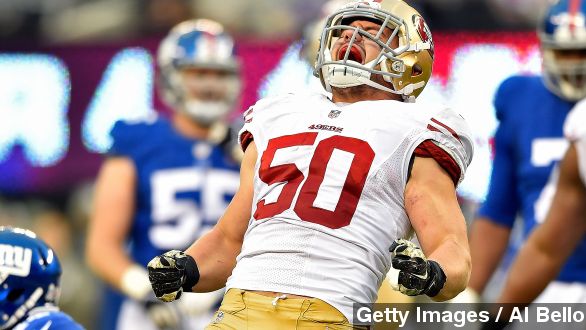 The already long list of NFL and college players who have turned down football, fame and a shot at buckets of money in the interest of their health just got longer.

San Francisco 49ers Linebacker Chris Borland announced his retirement to "Outside the Lines" Monday, making him the fifth high-profile NFL player younger than 30 to retire this offseason. Borland started eight of the 14 games he played last season and finished his rookie year with 107 tackles, one sack and even a vote for defensive rookie of the year.

ESPN calls Borland "the most prominent NFL player to leave the game in his prime because of concerns about brain injuries."

Many called him a rising star in the NFL. Yet Borland seems sure of his decision saying he wants to be "proactive" and that he's very familiar with the horror stories of Dave Duerson and Ray Easterling, both of whom suffered from brain trauma and committed suicide.

"I am blessed to be able to say that I get to retire happy," said former NFL player Patrick Willis.

Borland joins his former teammate Patrick Willis who retired earlier this offseason as an able-bodied starter at the age of 30. Willis made the Pro Bowl in seven of his eight NFL seasons.

What may be even more telling are not the NFL players who retire with more money than they care to count but rather the college players who have called it quits before their potential big break.

"This decision came down to me and my parents and the medical staff just being concerned about my health," said former UConn quarterback Casey Cochran.

West Virginia starting quarterback Clint Trickett announced his retirement in December despite having a solid 2014, throwing for more than 3,000 yards and 18 touchdowns.

The impact doesn't stop there. Between 2010 and 2012, Pop Warner football — the most popular youth football program in the country — saw participation drop almost 10 percent. That's more than 23,000 kids across the country. (Video via Pop Warner)

As awareness of the danger that comes with competitive football grows, so does the concern that decisions like these will have a long-term impact on the future of the NFL and football in general.

NFL reporter Peter King tweeted, "The Chris Borland story could well be a game-changer for the NFL."

And college football analyst Kirk Herbstreit added, "I guarantee the Borland early retirement gets the attn of a lot of Moms and youth fball."

And while some sports guys across the country view this as a game changer, many former players, coaches and personnel call it an overreaction.

"Could this be the beginning of a trend?"

"I don’t look at it like some mass exodus,"

Eliot Wolf, the director of player personnel for the Packers, tweeted, "Anyone worried about the future of football should see the amount of calls & emails we get from kids literally begging to get into pro days."

But while the fight for the NFL's future continues, what is not up for dispute is the evidence of a problem.

The NFL is set to pay upwards of $765 million to almost 5,000 retired players who are suing the league for hiding the dangers of head trauma. A federal judge still has to approve the deal.

A study paid for by the National Football League says one in three retired NFL players will develop long-term cognitive problems.