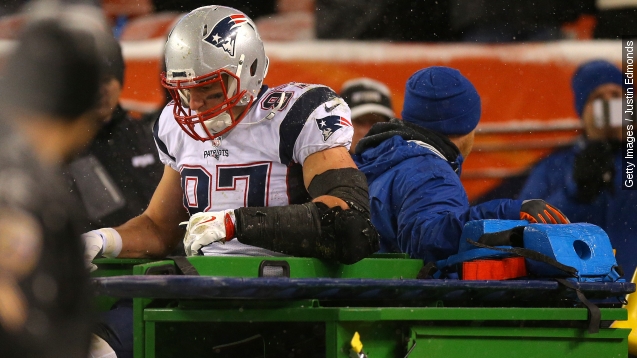 SMS
NFL Knee Injuries Outweigh Concussions, But That's Not A Bad Thing
By Matt Moreno
By Matt Moreno
November 30, 2015
Oddly enough, it seems some NFL players are willing to risk their heads in favor of saving their knees.
SHOW TRANSCRIPT

The New England Patriots lost a big offensive weapon after tight end Rob Gronkowski exited Sunday's game late in the fourth quarter with a knee injury. He had to be carted off the field, but reports say he avoided a season-ending injury.

Patriots quarterback Tom Brady said after the game the hit wasn't dirty, but did take a jab at the NFL's rules.

"I hate to see it, but it's really the only way for defenders to hit now. I bet if you asked a lot of players they'd probably rather you go high than low. You go low, that's what happens," Brady said.

Brady's basically referring to the massive amount of rules the NFL has implemented in an effort to prevent concussions. If this all feels like deja vu, it's because it is.

When Gronkowski tore his ACL in 2013, players also criticized the NFL's rules.

Since players aren't allowed to hit a defenseless receiver in the head, many defenders aim much lower, sometimes at the expense of the receiver or running back's knees. (Video via USA Football)

A few weeks after Gronk's 2013 injury, the NFL issued a memo saying knee injuries were "equal to or below levels from the past two seasons."

USA Today revealed the results of a survey weeks later that showed more NFL players (46 percent) were concerned about knee or leg injuries as opposed to head and neck injuries (24 percent).

As for 2015, the NFL preseason had 25 players suffer devastating knee injuries without even seeing the regular season, according to Manhattan Orthopedic Care.

The ACL Recovery Club reports 40 NFL players have already suffered torn ACLs. That's down from 45 a year ago and 63 two years ago, but there are still five games left in the regular season.

For now, the Patriots will have to continue their strong season without the help of Gronkowski.

As for how Belichick is feeling about that ...

"What are your emotions when you saw him in that position?" a reporter asked.

Belichick responded, "Well, what do you think?"