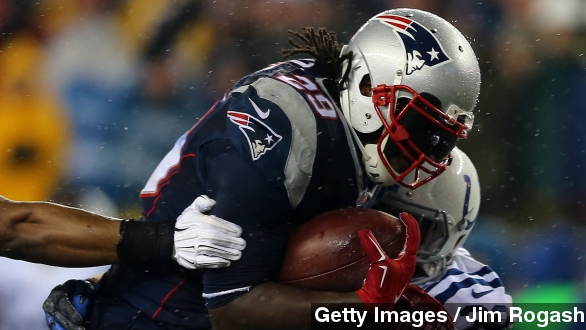 By Matt Moreno
January 19, 2015
The NFL confirmed on Monday that officials are investigating whether footballs provided by the Patriots were deflated more than league rules permit.
SHOW TRANSCRIPT

The New England Patriots did a lot with the football during Sunday night's AFC championship game, bringing it across the goal line six times to defeat the Indianapolis Colts 45-7. But it's not really the touchdowns the NFL is looking into.

It started with a report from Indianapolis' WTHR. Must be sore losers, right?

Well, the NFL confirmed the investigation Monday, with the league saying it was looking into whether the Patriots used "overly deflated footballs" during their win.

NFL rules state a football must be filled with 12.5-13.5 pounds per square inch of air, and the home team — in Sunday's game, the Patriots — must provide 36 footballs for the game. Those footballs are also subject to league testing before the game.

Theoretically, the Colts and quarterback Andrew Luck would also have access to these footballs. Luck had a rather forgettable day, completing 12 of 33 passes and throwing two interceptions.

The idea behind deflating footballs is simple: A ball with less air could be easier to grip, throw, hold onto and more, especially in poor weather. Which is exactly what the Patriots and Colts were dealing with Sunday with steady rain and gusts of wind.

It's a tactic probably most recently attributed to USC, which was fined by the NCAA for intentionally deflating footballs in 2012.

As for the Patriots, "Deflate-Gate" won't be affecting their 2015 Super Bowl chances. The league says it won't reverse the result of Sunday's game but will, instead, likely impose a penalty on draft picks and a monetary fine on the organization if there's evidence the Pats did, in fact, deflate the balls.

Of course, a cheating scandal is nothing new for Bill Belichick and the Pats. The team was infamously fined and lost draft picks in 2007 for videotaping opponents' signals during games — a.k.a. "Spy-Gate." The Patriots went undefeated that season before losing in the Super Bowl.

Officials removed at least one ball during Sunday's game, although some reports say multiple footballs were taken out of play. Pats quarterback Tom Brady scoffed at the accusations Monday morning in an interview on WEEI, saying, "I think I've heard it all at this point."