NFL Holding Veterans Combine To Help Players And Itself 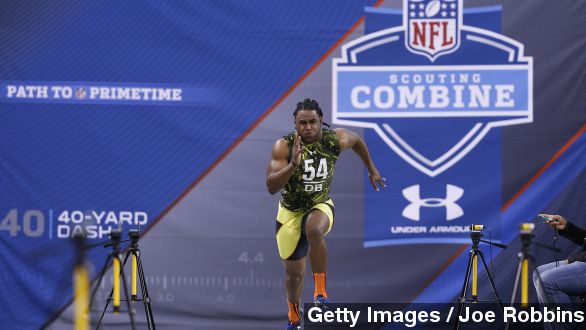 SMS
NFL Holding Veterans Combine To Help Players And Itself
By Jamal Andress
By Jamal Andress
January 15, 2015
The NFL veterans combine will take place in Arizona in March. The NFL will choose roughly 100 free agents work out in front of all 32 teams.
SHOW TRANSCRIPT

The NFL's twitter account confirmed Thursday the league will hold a veterans combine for free agents — possibly helping the players who may be close to making a team but don't really have an avenue to do so.

According to an NFL.com writer, the combine will take place in Arizona in March. The NFL will choose roughly 100 free agents through an application process and those chosen will work out in front of representatives from all 32 teams.

According to NFL Network reporter Ian Rapoport, who broke the news, the players chosen will "participate in position specific drills, timing and testing for all 32 teams."

The idea of giving specifically veteran players another combine to compete for the NFL's remaining spots was generally well received. But some think this move is meant to benefit the NFL rather than players who could use some extra exposure.

The veterans combine will fall right in between the normal combine in February and the NFL draft, which was pushed back last year from April to May and was the most-watched NFL draft ever.

And while combines are generally not the most exciting NFL events, the idea of Tim Tebow, Terrell Owens and Chad "Ocho Cinco" Johnson all competing for a spot on an NFL roster would definitely bring viewers. (Video via YouTube / California Strength)

So with the combine in February, the veterans combine in March and the NFL draft in May, the most profitable sports league in the nation will have a major event every month until June — which some writers think is exactly the point.

An NBC reporter writes, "It’s a good idea to give veteran players a chance to hang on, and it also provides some more television inventory possibilities for a league that’s trying to expand into every nook and cranny of the calendar."

For the free agents who do not get selected for the veteran's combine, there are still regional combines in which they can participate across the country.