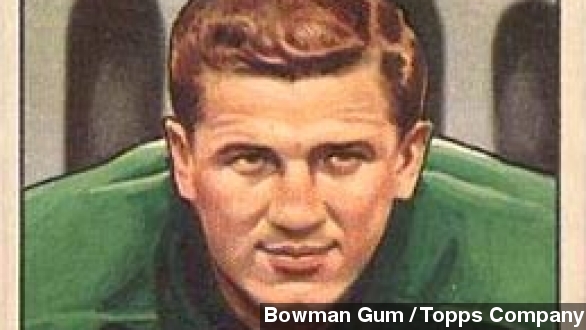 SMS
NFL Hall Of Famer And Last 2-Way Player Chuck Bednarik Dies
By Cliff Judy
By Cliff Judy
March 21, 2015
Chuck Bednarik was known as the NFL's last man to play both sides of the ball. The Hall of Fame Eagles player died Saturday after a brief illness.
SHOW TRANSCRIPT

The football world lost one of its toughest, most "old school" players Saturday as Chuck Bednarik died at the age of 89.

The Philadelphia Eagles were the first to announce the Hall of Famer's death on the team website. In a notoriously hard city to win over, Bednarik played a team record 14 seasons for the Eagles and won two NFL championships with the team.

"The last of the two-way players ... Hall of Fame center and linebacker ... please welcome back No. 60, 'Concrete Charlie' Chuck Bednarik!" (Video via Delaware County Daily Times)

Bednarik was best known for playing both sides of the ball as both a center on offense and a linebacker on defense.

"The championship game in 1960 — oh, by the way, the last time an Eagles team has won the championship — he played 58 minutes of a 60-minute game. Fifty-eight minutes. That's unheard of," Pro Football Hall-of-Famer and ESPN analyst Ron Jaworski said of Bednarik.

But he was also a member of a generation of football players whose paths to stardom were much less frequent and much less lucrative.

For decades, playing professional football meant anything but getting rich. Bednarik was known for heading straight to his second job as a part-time concrete salesman after practice each day, which earned him the nickname "Concrete Charlie." (Video via WPVI)

Bednarik was also known as one of the hardest hitters of his time. His hit on fellow Hall of Famer Frank Gifford in a game in 1960 was so violent, he knocked the halfback out for the rest of that season and the next year with a concussion.

College football also immortalized Bednarik, naming one of its most prestigious awards after him. The Maxwell Club hands out the Chuck Bednarik Award annually to college football's defensive player of the year. (Video via WCAU)

Bednarik was born only about 60 miles outside Philadelphia. Following his service as a B-24 gunner in World War II, he attended the University of Pennsylvania in Philadelphia before the Eagles drafted him in 1949. (Video via The Walter Camp Football Foundation)

This video includes an image from Getty Images and Bowman Gum / Topps Company.