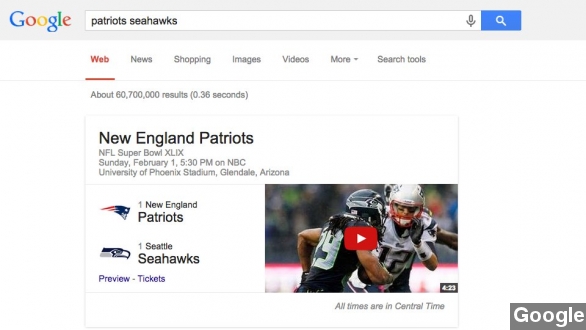 The NFL and Google are now in business, but don't expect to be able to watch live games on YouTube just yet.

The deal, as Re/code says, will mainly result in NFL-sponsored highlights, ads, game results and more being posted to YouTube and Google.

Previously, if you wanted to take a look at highlights from NFL games uploaded by an official NFL account, you'd need to go to the NFL.com website.

While you can still find content there, the NFL has been working feverishly uploading clips to YouTube since reports of the NFL-Google deal emerged.

The deal isn't a surprising one since the NFL has been trending this way recently making deals with Twitter and Facebook to show highlight clips. And it's logical for Google, too, which has done similar deals like partnering with ESPN for the World Cup.

Plus, you'll still be able to watch the Super Bowl online if you want to — just not on YouTube. Those rights belong to the big television networks that pay big money to gain exclusive access to the game.

This year, that award goes to NBC. All you have to do is download the NBC Sports Live Extra app to watch.

Re/code says, starting with the Super Bowl Feb. 1, the NFL will show some "in-game" clips , but doesn't go into detail on what that may mean.