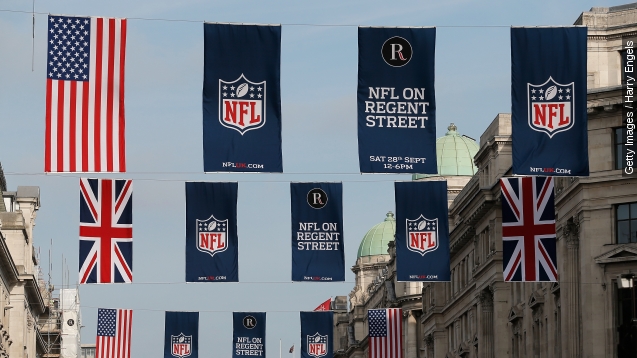 SMS
NFL Goes Long On Streaming In London Exhibition
By Matt Moreno
By Matt Moreno
October 24, 2015
Sunday's game will be the first-ever free live stream of an NFL game to a global audience.
SHOW TRANSCRIPT

The first ever live stream of an NFL game is here — live from London. (Video via NFL)

The Jacksonville Jaguars play the Buffalo Bills on Sunday.

And it's streaming globally, exclusively and for free on Yahoo (and local TV, of course). Even though the NFL's most popular games have drawn 27 million viewers on TV nationally so far this year —

the league wants to make sure it's ahead of the technological curve.

And bringing the game to international prominence is huge, too.

"I just like the sport and since the Jags are coming to the U.K., I thought they were a good team to pick," says a Jaguars fan with a very, very, very British accent.

The NFL in London has been a lucrative idea. Wembley Stadium's sold out for 12 out of the 13 NFL games it's hosted. (Video via Regent Street Association)

And the Jaguars will be heading across the pond for at least the next five years — maybe even the next 15.

Kickoff is at 2:30 p.m. local time in London — great timing for fans in Europe and Asia.

But who says you have to get out of bed? All you need is a laptop or an OTT device. (Video via Yahoo)