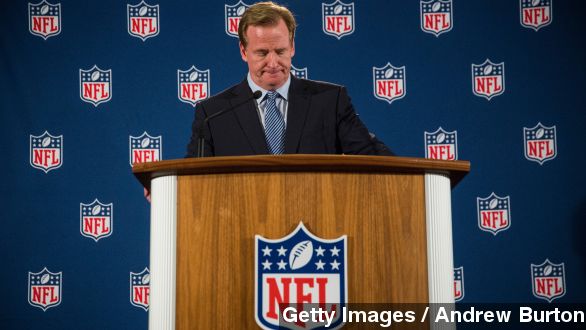 After a long, tumultuous season for the NFL off the field, Roger Goodell has finally put his new conduct policy on paper.

"The policy is comprehensive, it is strong, it is tough and it is better for everyone involved in the NFL," Goodell said. (Video via WJLA)

Goodell announced Wednesday that NFL owners approved a new personal conduct policy for players, coaches, owners and league officials. The policy is in large part a response to Goodell's mishandling of the Ray Rice incident from July and the fallout afterward.

According to the new conduct policy, violations involving assault, battery, domestic violence or sexual assault will result in a baseline six-game suspension without pay. A second offense of this nature will get you booted from the league.

The NFL released this chart to explain the contents of the policy, but it seems most folks are focusing on this last bit which sounds a lot like the Roger Goodell we all know. "The Commissioner or his designee reviews the panel’s recommendations and makes a final decision on disciplinary measures."

"I know some of you might question how we came to the conclusion the commissioner should be the final arbiter. ... That's the one person who understands what's important long term for the game," Patriots owner Robert Kraft said. (Video via WBZ-TV)

And while the owners may agree with that assessment, the NFL Players Association does not. The union released a statement shortly after Goodell's announcement which says in part, "Our union has not been offered the professional courtesy of seeing the NFL's new personal conduct policy before it hit the presses. Their unilateral decision and conduct today is the only thing that has been consistent over the past few months."

Goodell has assembled a committee to review the policy on what he says will be a "regular basis" rather than just after something bad happens.

And while there are no current players on the nine-person committee, there are two women: Charlotte Jones Anderson, the Dallas Cowboys Executive VP, and Dee Haslam, the wife of Browns owner Jimmy Haslam. (Video via YouTube / East Tennessee Children's Hospital)

NBC sports writer Darin Gantt says, "While both Haslam and Anderson are established members of the NFL machine, they at least bring a gender diversity to a process that was woefully lacking."

The committee does include two former players, but both of them have a stake in NFL team ownership.