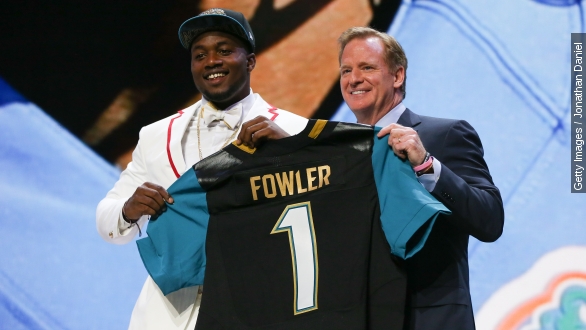 SMS
NFL Draft: These 3 First-Round Moments Were Gold
By Jay Strubberg
By Jay Strubberg
May 1, 2015
It's a night when NFL dreams become reality and the seemingly endless buildup is put to rest. Here are our top moments from the first round.
SHOW TRANSCRIPT

It's a night when NFL dreams become a reality and the seemingly endless buildup is thankfully put to rest. Here are our top moments from the first round of the 2015 NFL draft.

For starters, uh, where is everybody?

Same goes for Oregon's Marcus Mariota, who went second to the Tennessee Titans. He took it all in from Hawaii.

And Amari Cooper, the fourth overall selection picked up by the Oakland Raiders, didn't attend either. That's three out of the first four draft picks not in Chi-town for the festivities.

And, they're not alone. According to NBC Sports, they're just three of at least 10 players who opted to celebrate elsewhere.

I mean, come on, don't they realize they're missing out on an awkward hug with Roger Goodell? And speaking of those hugs, that brings us to our next top moment.

"Check this out. Not only the hug, and there goes the commissioner! He made his first sack at the draft," ESPN's Chris Berman said.

Yep, that's a whole lot of big fella. Cleveland Browns 12th pick, nose tackle Danny Shelton, gets our best celebration of the night, lifting Goodell up like he was a feather and giving him a big ol' bear hug. Gotta love it.

What's more, Shelton paid homage to his heritage, donning traditional Samoan attire. He reportedly said, "I want to be all about my culture and represent." Nice touch. Though, his fashion choices might be outdone by our top moment of the night.

"Dante Fowler Jr. may have topped the dress code tonight with those gold shoes," a WFOX reporter said.

"You see Dante Fowler Jr. there and came in looking very, very sharp of course," a WLS-TV reporter said.

That suit. Those shoes. Dante Fowler Jr. came dressed to the nines in his own eccentric way, wearing, as promised, a white Versace suit coupled with some sparkling, spiked gold shoes.

So, naturally, social media lit up with no shortage of opinions of his adventurous choice of attire. Our favorite was one delivered with just the right amount of snark: "Dante Fowler wearing gold shoes tonight. Looks like he's definitely a candidate to manage his NFL money well."

We didn't realize this was going to turn into such a fashion show. But, with what is likely to be record ratings for this year's draft, with millions watching around the country — you gotta look good, right?