This NFL Coach Is Fed Up With Preseason Games 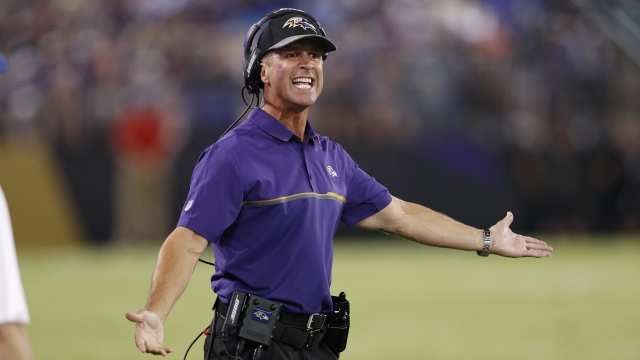 SMS
This NFL Coach Is Fed Up With Preseason Games
By Carter Woodiel
By Carter Woodiel
August 28, 2016
Players often get injured in preseason games, and Ravens head coach John Harbaugh has had enough.
SHOW TRANSCRIPT

"The league and the players association is looking very hard and trying to figure out ideas to work out the preseason," Harbaugh said at a press conference following a Ravens preseason game. "These are big, fast, strong men running around out there; it's not 25 years ago."

SEE MORE: NFL Punts On First Preseason Game Because The Field Was 'Like Taffy'

A couple key Ravens were injured in the game, including tight end Benjamin Watson, who tore his Achilles tendon and will miss the rest of the season.

Each NFL team plays four preseason games a year. And every year, it seems a few teams get bitten by the injury bug.

Take the Dallas Cowboys. Their star quarterback Tony Romo fractured his back in a preseason game this year. So for the next six to 10 weeks, they'll be starting a rookie at QB.

The NFL has discussed shortening the preseason before. This past offseason, the league's competition committee talked about cutting it from four games to three. But that's not the number Harbaugh has in mind.

"If I had my druthers, I'd go none," Harbaugh said. "That'd be my thing. That might be an extreme point, but we can run scrimmages against other teams, and we can run practices and figure it out, and we'd all be in the same boat."

There's an incentive for the NFL to keep preseason games around, though. Season ticket holders are usually required to buy a couple of preseason tickets along with their package, which drives up sales.

SEE MORE: Some NFL Season Tickets Come With A Price — Before The Price

And nationally broadcast preseason games can still be among the highest-rated shows of the night on TV.

Harbaugh might have an answer to this, though. He says he'd like to see the league turn a couple preseason games into games that count and get rid of the rest.