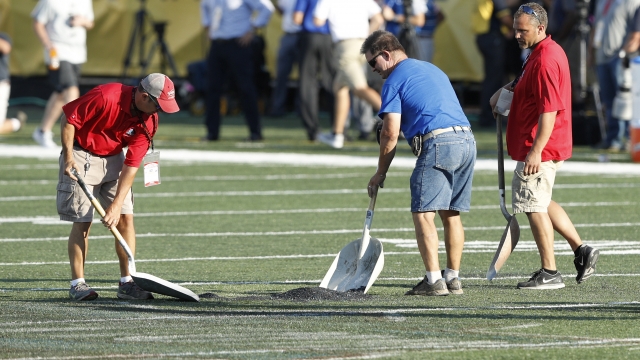 SMS
NFL Punts On First Preseason Game Because The Field Was 'Like Taffy'
By Grant Suneson
By Grant Suneson
August 7, 2016
The NFL's first preseason game was canceled hours before kickoff because the paint used on the field made it sticky and unsafe for the players.
SHOW TRANSCRIPT

If you're one of the millions of Americans anxiously awaiting the return of football, you're going to have to keep waiting.

The NFL's Hall of Fame game, which is the official start of the NFL preseason, was canceled because the field is in such poor shape.

SEE MORE: Some NFL Season Tickets Come With A Price — Before The Price

"From what I've been told, the wrong paint was used, and if you could get out there and see it, it had dried; it was very sticky; it was very gummy; it was almost like taffy," reporter Lisa Salters said on ESPN.

And while a field full of taffy would be delicious, it would also be very unsafe. Cleats could get caught up in the gunk and cause a nasty leg injury, which is the last thing anyone wants in a preseason game.

The NFL issued a statement saying, "We are very disappointed for our fans, but player safety is our primary concern, and as a result, we could not play an NFL game on this field tonight."

The Hall of Fame's president said the fans who had hoped to attend will be given a refund. Football-starved fans will have to wait until Thursday for the preseason to actually start.