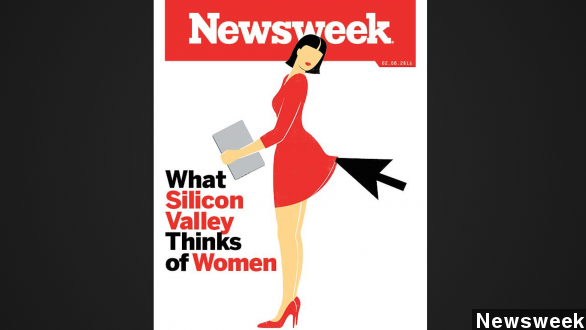 This is Newsweek's latest cover story: "What Silicon Valley Thinks of Women."

And this is Twitter's reaction to the art on the cover: insulting, tone deaf, ˇ.

Take another look. The cover shows a woman in heels with a mouse cursor lifting the back of her dress.

We read the whole article, though, and it's actually a pretty thoughtful look at an issue that's very real for some women working in the technology industry. The reality can be a bro culture that often feels as though sexism is condoned or even encouraged.

We took the article's advice and Googled "frat boy culture" and "Silicon Valley," and these are the top five results, showing, at the very least, that it's a well-trod issue.

"How many women here have been told they're too aggressive at work? Right," Facebook COO Sheryl Sandberg asked the crowd at a Fortune Magazine event.

Facebook, for example, is 69 percent male. And at Google, women make up a similar 30 percent of the workforce.

But the Newsweek piece focused largely on the difficulties prospective female entrepreneurs can face getting funding in the male-dominated world of venture capitalism.

And while the piece doesn’t provide much in the way of solutions, the controversial cover did do what the magazine's editors probably hoped: get us talking.