News To Get Excited About From Disney's D23 Expo 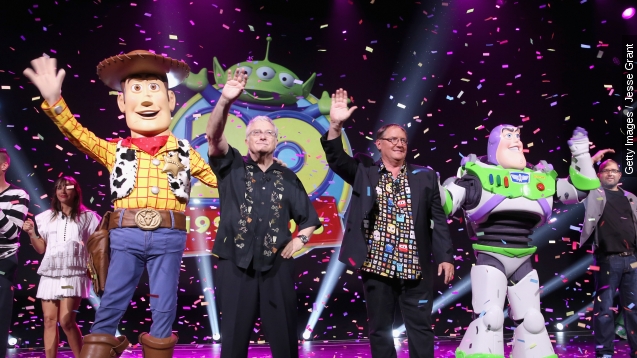 No. 1: The songwriting duo from "Frozen" is working on another project. Robert Lopez and Kristen Anderson-Lopez will score the music for "Gigantic." (Video via Walt Disney Studios / "Frozen")

It's described as "the definitive version of Jack and the Beanstalk ... with comedy and deep emotion."

The film's director said "it is a love story between Woody and Bo Peep."

The fourth film will follow Woody and Buzz setting out to find Bo. Because where was she in "Toy Story 3"? Release date: June 16, 2017.

Ty Burrell as a beluga whale, Ed O'Neil as an octopus and Kaitlin Olson as a whale shark.

The story will follow Dory as she struggles to find her forgotten family. Release date: June 17, 2016.

No. 4: Will Turner is back. (Video via Walt Disney Studios / "Pirates of the Caribbean: The Curse of the Black Pearl")

Orlando Bloom will return as Will Turner in "Pirates of the Caribbean: Dead Men Tell No Tales." Release date: July 7, 2017.

A first look at the live-action film (and Bill Murray as Baloo the Bear) received a standing ovation from fans.