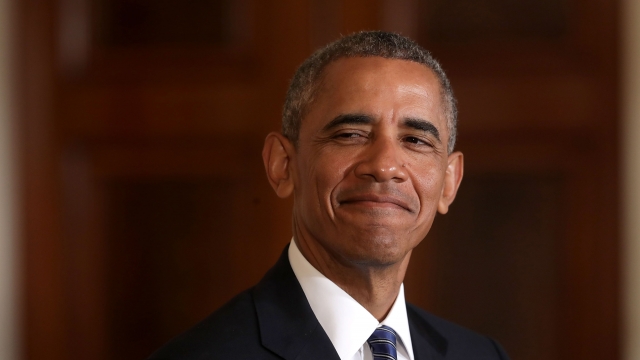 SMS
Here's Every Organism Named After President Obama
By Lindsey Pulse
By Lindsey Pulse
September 10, 2016
The president currently has seven creatures named after him. The most recent is a parasite called Baracktrema obamai.
SHOW TRANSCRIPT

President Barack Obama is a parasite. No, not like that. One is just named after him.

While that might not sound like the most flattering thing ever, especially given his history with pests, it's all good. The scientists who named the new flatworm say they went with the name because the parasite is so unique.

Baracktrema obamai is found in Malaysian freshwater turtles. The parasitic flatworm infects their lungs and can be fatal.

In all, scientists have named seven organisms after Obama.

Researchers found a hairworm in Kenya and named it after him. That worm was found near where the president's father lived, hence the namesake.

An extinct and apparently toothy lizard is called Obamadon — or "Obama's teeth" — because of the president's toothy smile.

Or a fungus that looks kind of like a dried leaf. Researchers found it in 2007 near the end of Obama's first presidential campaign and named it after him as a nod to his support of science education.

A darter fish, named for the president's leadership in environmental protection.

This bird, scientifically named Nystalus obamai, but generally referred to as a western puffbird.

And finally, a not-at-all-scary-looking trapdoor spider. It has relatives named after celebrities, like Angelina Jolie and Bono.

When it comes to the parasites, these namesakes might just seem like a really clever way to diss the commander in chief, but having an organism carry your name is actually a honor.

And if having seven creatures named after you isn't a compliment, what is?